Environmental and Arts Festival Draws Many to Almaty Mountains 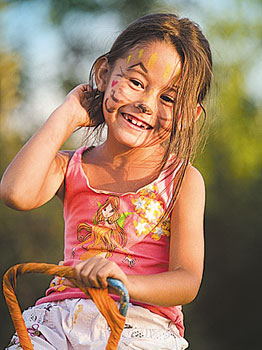 One of the young participants of the pink zone demonstrates her body painting.

ASTANA – Children and adults of all ages gathered Aug. 23 in a large tent city at the Fishing Dream fishing site in the Almaty mountains for the three-day, fourth annual Four E Festival.

The name of the festival, Four E, stands for environmental, ethnic, emotional and evolution, the four pillars of the festival’s philosophy. The festival aims to create an ecologically aware society and promote healthy lifestyles. It also offers attendees a chance to develop their creative potential and learn about yoga and other physical and spiritual practices. Special programmes for kids, an ethnic music festival, art displays and dancing complete the overall festival experience. Held under the motto, “Evolution for Life!,” the Four E Festival seeks to provide new ways of thinking for those seeking a happy and healthy life.

Camp territory, as usual, was divided into four zones, a green zone of ecology, a pink zone of emotion, an orange zone of ethnicity and a purple zone of evolution.

The green zone was the site of lectures about hazardous waste and how to eliminate its impact on the ecosystem, alternative energy and energy-saving issues and other topics on living in harmony with nature. This year, the festival was attended by well-known German ecologist, Dagmar Schreiber, who recently published a book about Kazakhstan and its pristine nature. Schreiber talked about how Europeans maintain trees and Kazakhstan’s need to borrow this tradition in order to reduce air pollution and beautify its cities. 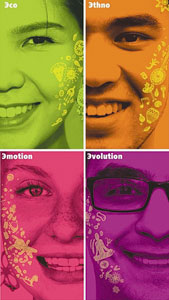 In the pink zone, designated for kids, educational psychologist and logopedist Gulnara Baidauletova and teacher of foreign languages and arts and crafts Maya Baidauletova from Triumphator educational centre helped children make handmade decorative patterns and jewellery. Children also learned some basics of traditional Japanese crafts, played a game called kendama, which bears similarities to the classic cup-and-ball game, and took photos in tiny kimonos. The Japanese atmosphere was created with the participation of the Ichikawa Japanese house. Amateur and professional musicians performed ethnic music in the orange zone, the space for everything creative, bright and loud. Ethnic tunes from Hapanasasa, Duduk, The Mountain Rivers and other music collectives, master classes on drums, energetic African dances, flamenco, salsa, samba and belly dancing as well as shamanistic games made this zone a loud and cheerful one. Singing and dancing continued deep in the night.

The purple zone was home to spiritual practices, yoga and lectures and seminars on how to find peace. Every morning, instruction on different poses of the hatha, tantra and Iyengar yoga traditions were offered. Meditation, laughter therapy and throat singing master class were also included in the programme, as were Aikido or Ushu classes for the martial-minded and tai chi classes for the less bellicose.

New this year was a blue zone, an area of contemporary art. Here, the Kizil Traktor art group performed, the Art&Shock theatre presented an improvisational play and open-air video, photo and other art projects were displayed. After dark, a Future Energy neon light show was shown.

Hot-air balloon and helicopter flights were other surprises for this year’s participants. Organiser and coordinator of the ethic zone Alena Lobastova said, “The festival is getting wider and gathers more and more participants every year.”

“I’m very glad to see that we have such cheerful people who prefer alternative ways of vacationing!” said Lobastova. “I don’t want to describe the festival. I just want to invite everyone to participate in this fantastic event with an open heart and leave part of your energy here. This is how the festival exists, because the festival is just people feeling the same emotions the same way. ”