By Lilia Syzdykova in International on 18 September 2013

ASTANA – The recent visit of President Xi Jinping to Kazakhstan was a historic event in Sino-Kazakh relations and opened up new prospects for bilateral relations, the country’s new ambassador in Astana Le Yucheng said. 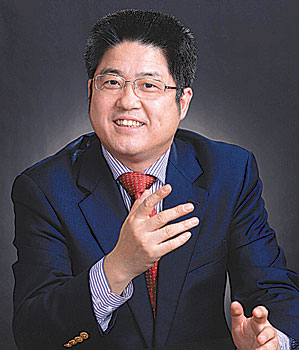 Addressing a gathering of chief editors of national media in Astana, Le Yucheng summed up the results of the Sept. 6-8 visit and also talked about developments in Sino-Kazakh relations generally.

“The leaders of the two countries thoroughly exchanged views on bilateral relations and governance as well as on regional and international issues of mutual interest,” the ambassador said of the visit. “They reached a strong level of understanding and mapped out a strategic plan for the development of bilateral relations in both the medium and long terms, signed a joint declaration on the further development of the comprehensive strategic partnership between China and Kazakhstan, as well as more than 20 other political documents and cooperation agreements worth about US$ 30 billion.”

The visit raised bilateral relations to a new level and outlined the main features of cooperation between China and Kazakhstan.

First, the diplomat noted that relations between the two countries have a strategic nature. As the recent visit showed, the two leaders have really found mutual understanding, which is an important guarantee for the stable development of bilateral ties. The idea of a great renaissance of the Chinese nation, initiated by President Xi Jinping, coincides with the Strategy “Kazakhstan 2050” advanced by President Nazarbayev both in the content and in terms of realization. The two countries can support and interact with each other in the implementation of these plans, the ambassador said.

China and Kazakhstan will continue to deepen cooperation in the fields of national security and regional stability, support each other in protecting the interests of state sovereignty, stability and development. On the international agenda, the sides agreed on the further strengthening of coordination and cooperation within the UN, Shanghai Cooperation Organization (SCO), and Conference on Interaction and Confidence-Building Measures in Asia (CICA) and other multilateral formats.

“Kazakhstan will support China in its chairmanship of the CICA from 2014-2016. China, in turn, will support Kazakhstan in holding EXPO 2017,” the ambassador said and recalled that the common strategic interests of the two countries include the revival of the “Silk Road” Economic Corridor.

Another feature of Sino-Kazakh relations, according to Le Yucheng, is their business-practical orientation. Illustrating the high effectiveness of the business partnership, the ambassador noted that China is Kazakhstan’s largest trading partner. Last year, bilateral trade amounted to about US$ 25 billion. China’s direct investment in Kazakhstan exceeded US$ 20 billion. Sino-Kazakh oil and gas pipelines, respectively, are the first trans-border pipelines in China. The international border cooperation center Khorgos is also the first such center in China. The Moynak power plant, built by a Chinese company is the first major power plant in Kazakhstan, constructed after independence.

Among the major joint projects there is also the Western China – Western Europe road, the Chuntsin – Xinjiang – Europe international railway, the railway Khorgos – Altynkol, an aromatic hydrocarbons plant in Atyrau, Pavlodar aluminum enterprise, and a bitumen plant in Aktau, etc.

During the last visit, as the ambassador recalled, a number of new agreements were signed. For example, the Chinese company CNPC will invest US$ 5 billion to purchase a share of Kashagan oil field. Kazakhstan in turn, will build a terminal in the Chinese port of Lianyungang. The two countries will also cooperate in the field of new energy, high technologies and enhance collaboration in non-oil sectors of economy.

The third important feature of Sino-Kazakh cooperation, according to Ambassador Le Yucheng is national character.

“The development of our relations should serve our people. We must put the interests of the two nations at the center of our efforts as well as practical ways to improve their lives,” the diplomat said.

Much work is being done to simplify the visa regime between China and Kazakhstan. Customs authorities of the two countries agreed to open a green channel for agricultural products at the Bakрty checkpoint. During the visit of the Chinese leader, the Chinese company “Huawei” signed an agreement with Kazakh telecommunications authorities on cooperation in the construction of a mobile network of the fourth generation on the entire territory of Kazakhstan.

According to the ambassador, in order to promote youth exchanges, in the next 10 years, China will provide US$ 30 million in government grants for the member-states of the Shanghai Cooperation Organization, 10 thousand Confucius Institute teachers will be invited to China for education and training. During the visit to Nazarbayev University, President Xi Jinping invited 200 students and teachers to a summer camp next year. In addition, Chinese companies sponsored the creation of the Astana National Academy of Dance and Ballet.

As the new Chinese ambassador to Kazakhstan, Le Yucheng said he is full of optimism and confidence and will spread the spirit of the visit, comprehensively promote pragmatic cooperation in various fields and continuously enrich the content of bilateral strategic partnership for the benefit of the two countries and their peoples, thereby making contributions to the development and stability of the region.