ASTANA – The 13th biennial conference of the European Society for Central Asian Studies (ESCAS) took place at the Nazarbayev University on August 5-7 in Astana. The event attracted 180 participants from 16 countries from Central Asia, Europe and North America who presented their papers in panels and round-table discussions. 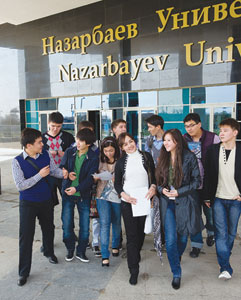 ESCAS, a network of researchers, students and teachers in the humanities and social sciences with an interest in Central Asia, chose the Nazarbayev University for its biennial conference this year.

“The European Society for Central Asian Studies was established in 1985, and so far 13 biennial conferences have been held,” President of ESCAS Dr. Alexander Morrison, told the Astana Times in an exclusive interview. Morrison is a lecturer in imperial history at the University of Liverpool, U.K. and a Fellow of All Souls College, University of Oxford. From January 2014, he will be professor of history at Nazarbayev University in Astana.

ESCAS is a network of researchers, students and teachers in the humanities and social sciences with an interest in Central Asia (defined as Kazakhstan, Kyrgyzstan, Uzbekistan, Tajikistan, Turkmenistan, Afghanistan, China’s region of Xinjiang, Mongolia and neighbouring regions of Russia, Iran and the Caucasus). It has approximately 250 members, drawn mainly from Europe and Central Asia, but also from India, Pakistan, China, Japan and North America. The society is run by a board of 8-10 members, led by a president. The principal purpose of the society is to organise the biennial conference as an opportunity for scholars from around the world to meet, present their research and exchange ideas about Central Asia. This is the first time the conference has been held in Central Asia itself.

“The main purpose of the event is to bring together scholars from across Europe and Asia, to allow them to present their most recent research, to discuss it with each other, to forge new contacts and develop new ideas,”said Morrison. According to him, Astana has held the largest ESCAS conference to date. “We had 180 people presenting papers, and more than 200 registered for the conference in all. They came from 25 different countries, including Japan, India, Pakistan, Kazakhstan, Kyrgyzstan, Tajikistan, Uzbekistan, the U.K., France, Germany, the U.S., Mexico and Canada.”

The theme of the conference was “From the Steppe to the Sown: The Symbiosis of Nomadic and Sedentary Civilisations,” which presented an opportunity for guest speakers, researchers, media representatives and scholars to share and explore major topics on Central Asia.

“This theme was chosen because we want to discuss Central Asia,” said Anthropology Professor at the Nazarbayev University Alima Bissenova. “We want to discuss the cultural space that had been based on the crossroads of different layers of nomadic and settlers’ civilisations.”

While the theme uncovered many new issues, Kazakhstan’s history was among the main subjects. “We had presentations on the history of the Kazakh Steppe in the 19th century, on Central Asia during World War II, on the development of a cosmopolitan society in Kazakhstan in the Soviet period, on pastoralism and its particularities, on Islamic identities in post-Soviet Kazakhstan, and on labour migration and labour relations – this is not an exhaustive list – and many presentations set Kazakhstan in its wider regional context, looking also at its neighbours in Russia and Central Asia,” Morrison added.

The ESCAS board decided to hold the ESCAS conference in Central Asia for the first time “partly as a recognition of the rapid intellectual changes which had taken place in the region since 1991, and partly for the benefit of Central Asian participants. We invited expressions of interest in hosting it, and Nazarbayev University offered the most comprehensive package – a young, enthusiastic, highly research-active faculty, free accommodation for delegates on campus, fantastic facilities for presentation and discussion, excellent catering, and a very reasonable registration fee. We also thought that whilst all these things would benefit ESCAS and its delegates, hosting the conference would provide a great opportunity for a new university to showcase its facilities and its research: it was definitely mutually beneficial,” he commented.

Morrison has done his share of organising events on an international scale and was fully aware of all the challenges this time around. “I have been a member of the board of ESCAS since the 11th biennial conference, held at the Central European University in Budapest in 2009. I co-organised the previous conference, at Churchill College, University of Cambridge, in 2011, and will now be stepping down, having served my full term. We elected a new president, Professor Meruyert Abusseitova, at this conference, and together with current and newly elected members of the board she will have the responsibility of organising the next conference, which will probably be in Germany or Switzerland,” he noted.

Organising international conferences poses some challenges. “The main logistical challenges – accommodation, catering, assigning rooms – are dealt with by the host organisation of the conference, in this case Nazarbayev University. The responsibilities of the ESCAS president and board are to find a suitable venue, fix a date, circulate a call for papers, and then sift through the proposals which come in and decide which to accept. Usually there are 250-300 of these, in all the various disciplines of the Humanities and Social Sciences. The papers are arranged into panels by theme, and we then have to set up a registration and payment website, and start writing to all those we have invited. There is an enormous amount of email correspondence involved, and speaking personally, I suppose the biggest challenges are usually posed by very needy conference delegates who make unreasonable demands. Thankfully, we had very few of them this year, and overall everyone seems to have been delighted with the venue, the organisation, the people they met and the intellectual quality of the papers and discussion.”

“I have been coming to Kazakhstan regularly since 2003, primarily to work in the state archives in Almaty, but also visiting the Ala-Tau, Taraz and Shymkent, and twice now undertaking field research trips through the Syr-Darya region from Aralsk to Turkestan via Kazalinsk, Karmakchi and Kyzlorda. I have many friends here, and have always met with an incredibly warm welcome. Almaty is a wonderful, vibrant, cosmopolitan city, with superb trees and a glorious mountain backdrop. From the historian’s point of view it has much the most important collections of books and documents on the history of the region. Astana is remarkable; I am not sure there is anywhere else quite like it, and it will be fascinating to see how the city develops over the next few years when I will be living here. I am also very fond of Shymkent, an extremely elegant, civilised city, with by far the best pilav in Kazakhstan.”

The ESCAS conference was held for the first time in London in 1987. This has been the 13th biennial conference in the 12th country in total. The most recent conference before this one was held at the University of Cambridge, U.K.