Our country has become an independent state earning a high status recognized by the international community. Thanks to the dedicated work and prudent policy of President Nursultan Nazarbayev and the monolithic unity of our people, we have reached tremendous results. 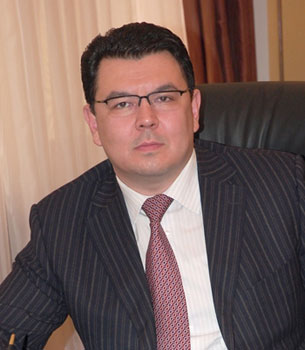 Confidently entering its third decade as an independent state, Kazakhstan has achieved great successes in all areas of development. Today, Kazakhstan has become a country with a high position and a serious view on the international scene.

Our country has attracted foreign direct investment of more than $170 billion as a result of the establishment of close economic and trade ties with foreign states and the successful implementation of the investment policy. This led to the development of the national economy, and all regions of Kazakhstan have embarked on a path of rapid progress.

The Zhambyl region makes a significant contribution to the sustainable and rapid development and prosperity of the entire country. Today, the Aulie-Ata area became one of the regions with the steadily developing economy and agriculture.

The Zhambyl region adopted a programme of development for 2011-2015 aimed at sustainable and balanced development of all parts of the region, ensuring economic growth through diversification and competitiveness. Thus, according to the plan, the volume of gross regional product in 2012 reached 778.2 billion tenge, which was 27% higher than in 2010.

As a whole, over the past decade, the regional economy has grown in all directions. In particular, the industrial production has increased five times, meanwhile gross regional product grew nine times.

In the framework of the State Programme of Industrial and Innovative development (SPAIID), the Zhambyl region has implemented 38 investment projects worth 545.2 billion tenge. Under the programme, 6,000 new jobs will be created.

The Aulie-Ata area is rich in minerals. It has large reserves of raw phosphorite, fluorite, gold, silver, copper, zinc, lead, barite, coal, mineral salts. In general, the Zhambyl region concentrates 72% of phosphate rock reserves of the country, 68% of fluorspar, 65.1% of quartzite, 8.8% of gold, 3% of copper, and 0.7% of uranium.

Currently, in order to develop the Karatau phosphorite basin in cooperation with the Russian company “Eurochem” we have started a joint full-scale project. The Russian company on the basis of the current chemical plant is planning to produce annually one million tons of fertilizer phosphorus and azote. It is also planning to invest more than $2.4 billion in re-equipment, infrastructure development and training. This, in turn, will give an impetus to the development of the chemical industry in the region.

As is known, the Zhambul region has the largest reserves of phosphate rock in the Karatau phosphorite basin, which has no analogues not only in the country but also in the CIS. Today, there are large mining and processing phosphorite enterprises operating within Kazphosphate LLP.

In addition, in recent years, the metallurgical industry of the region has begun to flourish. The region gives priority to the production of ferroalloys, gold, silver, metallurgical industry. We are confident that, in the coming years, products of the Taraz Metallurgical Plant will be in high demand. Altynalmas JSC is implementing an investment project to create a modern production, using new automated technologies for the development of the Akbakai cluster. It is planned to produce 2.8 tons of gold a year.

There are major projects in the chemical industry to implement. Thus, the creation of a special economic zone (SEZ) Chemical Park Taraz is important. A production of chemical products targeting new export using high technology will be created on the basis of the Chemical Park Taraz SEZ. This SEZ plans to establish 15 plants to produce different kinds of products. These projects do not have analogues in the CIS. The project will generate an annual income of 75 billion tenge. It is expected to open 1,500 new jobs after the implementation of the project.

As we know, our country will hold the Astana International Exhibition “EXPO 2017.” Its theme is the development of alternative energy. The Zhambyl region has made significant progress and has gained significant experience in this area.

In 2012, the Kordai area launched the first solar power plant in Kazakhstan with the capacity of 0.5 megawatt. Investors plan to increase the capacity up to 7 megawatt.

This year, the Shu area has implemented a project on the Tasotkel hydroelectric power station with a capacity of 9.2 megawatt.

Also, in 2013, Vista International LLP will complete the construction of the Kordai wind power station with a total capacity of 21 megawatt, its first stage power is 4 megawatt.

In 2014-2015, the Central Asia Green Power company is planning to build a Zhanatas wind power station with a capacity of 100 megawatt in the Sarysu area. Soon, the Karakystak HES with a capacity of 2.3 megawatt will start operating in the Turar Ryskulov area.

The region has prepared promising projects in the field of agriculture. The largest of them is the Taraz agro-processing logistics centre. Within this project, one logistics centre and about 20 businesses will operate.

With the opening of the Taraz logistics centre 1,200 people will have new jobs; the products of the centre will be exported to all regions of Kazakhstan, as well as to Russia, Belarus, the countries of Central Asia and the European Union.

The region has great opportunities for the development of domestic and international tourism so we attach great importance to it. Thus, ancient settlements such as Taraz, Akyrtas, Kulan, Merke located along the Great Silk Road have preserved extraordinary monuments of history and culture. We believe the historical monuments Aisha Bibi, Babaji Khan, Karakhan and Dauytbek originating from the ancient era will open the way for international tourism.

To achieve results, we have developed a master plan for the development of a tourism cluster until 2015. Its main purpose is to create a modern and highly competitive tourist complex providing opportunities to meet needs of both local and foreign nationals in various tourist services. It is planned that income from the tourism industry will increase by 15 percent.

The Zhambyl region is developing mutually beneficial economic ties with foreign investors taking into account the above-mentioned priorities thanks to our country’s constructive policy. For example, our region is implementing a number of investment projects involving companies from France, Italy, Malaysia, Czech Republic, the South Korea, Iran and Russia.

In addition, the traditional International Investment Forum Taraz Invest with the support of the Region’s Administration has become important for the economic development of the region. Thus, following last year’s forum Taraz Invest – 2012, memoranda of a total value of 109 billion tenge were signed.

It is very important for us to attract foreign investment as they bring standards of today’s complex production facilities management and rules of world business. Our region has created favorable conditions for foreign investors. Many good things have been done already in this direction, but still there is much work to do.

Today, the Zhambyl region has great economic potential. Our main goal is to raise the well-being of the region and to fully use a wide range of opportunities to further improve the living conditions of the people.

The author is the Akim (Governor) of the Zhambyl region. This opinion first appeared in the Diplomatic Herald magazine and is reprinted here with permission.