By Nadezhda Khamitova in International on 24 July 2013

ASTANA – On July 18, Deputy Prime Minister of Kazakhstan Yerbol Orynbayev and Kazakhstan’s Minister of Healthcare Salidat Kairbekova visited the Karaganda region, where they monitored activity of local health centres and held a national conference on the outcome of the introduction of the Unified National Health System (UNHS) in the first half of 2013 and plans for 2014. 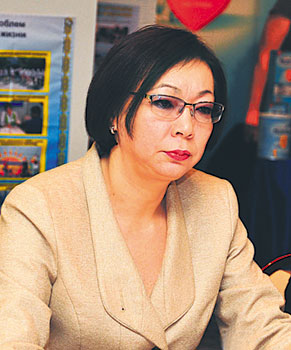 Minister of Healthcare Kairbekova reported that the successful implementation of the UNHS has improved basic health indicators.

Moreover, the effective use of health care resources is being enforced at the hospital level. Since 2010, the number of hospital beds has been cut by 10,000 and over 12,000 hospital beds have been converted.

A number of changes have improved patient care. These include the introduction of new hospital technology; the intensification of the diagnostic and treatment process, which has decreased the average length of hospital stays from 12 days to 9 days and increased hospital bed turnover from 27 to 33; the development of tertiary care centres on the national and regional scale; the implementation of hospital choice (over 800,000 people per year are now hospitalised at centres they choose) and the commissioning of new high-tech, multi-disciplinary and specialised hospitals such as the National Scientific Cardiology Centre in Astana, the cardiology centre in Pavlodar, Children’s Hospitals in Aktobe and Taraz and city hospitals in Almaty and Astana.

Savings from increased use of technology and optimised use of hospital beds will be spent on developing innovative technologies. The number of appointments for treatment abroad has decreased. The quality of inpatient has significantly improved since the UNHS was implemented because of the use of advanced technologies in the treatment of many diseases, the use of effective medicines and high-quality medical products, standardisation of medical technology and accreditation of health care providers, improvement of quality control of medical services, the introduction of modern perinatal technologies, adequate medical care for acute coronary syndrome and stroke and the economic motivation of medical institutions and personnel.

The minister focused attention on the ongoing process of modernising the organisation system and funding of community-oriented primary health care (PHC) in accordance with the principles of the UNHS.

Preparation for implementing the UNHS on an outpatient basis is ongoing. Calculations have been made to align the integrated capitation for outpatient care, taking into account regional peculiarities. The mechanism for financing primary health care organisations for integrated capitation with performance is being developed. The concept of the Unified Health Management Information System has been developed and approved by the government of Kazakhstan and its implementation plan has been adopted.

Deputy Prime Minister Orynbayev noted that the results of the UNHS in the hospital sector have demonstrated the efficacy of its principles, namely the free choice of hospitals for planned hospitalisations, the development of a competitive environment among health care providers, payments established in accordance with types of treatments and quality of treatments and transparency of service and rates.

In addition, the deputy prime minister stressed the importance of improving the quality of medical education, saying the country should define another institution that, in addition to Nazarbayev University, will provide domestic education programmes in accordance with advanced training standards.

This task will be implemented in collaboration with foreign partners.“We must now boost the introduction of the Unified National Health System in Kazakhstan. Results of the implementation of the UNHS in the hospital sector have shown the correctness of the chosen principles, namely the free choice of hospital for planned hospitalisation, the development of a competitive environment for health care providers and payments related to the amount and level of quality of services rendered. All this is very important,” Orynbayev said at the meeting. He also outlined the main priorities for the further development of the health system in 2014.

Orynbayev and Kairbekova also visited the Regional Trauma and Orthopaedic Centre, which has been in operation since 1939. The centre has 210 hospital beds and patients are treated in seven specialised departments for adults and children, including orthopaedics, burn and rehabilitation units. More than six million patients per year receive treatment for musculoskeletal injuries and diseases at the centre and more than 2,000 surgeries have been performed there. Since 2008, it has operated as a highly specialised national clinic. Patients have noted that now that they have an opportunity to receive appropriate medical treatment at the centre, they have no need to travel anywhere.

The officials also paid a visit to the City PHC Centre, which is also more than 50 years old. To date, the center has 120 physicians and 180 nurses who take care of a population of more than 100,000 people. The City PHC Centre provides family medicine, obstetrics and gynaecology, consultative and diagnostic services, laboratory work, functional diagnostics, X-ray services and paediatric services. A day hospital also operates there. From 2008 to 2012, the team at City PHC Centre reached the following indicators: It reduced the burden on specialists by 17.9 percent, the infant mortality rate by 33 percent, the rate tuberculosis incidence by 20 percent, deaths caused by tuberculosis by 36.5 percent and brought the early detection of cancer to 60.8 percent (above a regional index of 50.8 percent in 2012).

Workers and administrators at the centre have noted that these results have been achieved through the introduction of the PHC, which reduced the number of staff positions by 1.5 times, as well as monthly performance evaluations, the introduction of new staff units, the transfer of some responsibilities from doctors to nurses and the functionality of medical equipment.