By Rishad Sadykov in International on 24 July 2013

ASTANA – The first of 33 bicyclists from around the world who are riding solar-powered bicycles from Savoy, France to the Kazakh capital in support of EXPO 2017 and its theme “Future Energy” arrived in Astana on July 23. 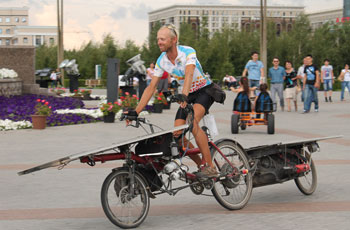 Belgian bicyclist Raf Van Hulle was the first of the riders to pull up to the city’s Baiterek Monument 37 days and 7,000 miles after leaving Savoy. He will be followed by riders from Belgium, Switzerland, Canada, the Czech Republic and France, as well as Askar Syzbayev of Kazakhstan. They are all participating in “The Sun Trip: On the Road to Astana EXPO 2017.”

The ride is meant to support EXPO 2017 and its theme, Future Energy, as well as to draw the world’s attention to renewable energy sources and energy conservation policy.

Hulle, of the Solar Wind team, was greeted by residents of Astana and representatives of the Embassy of France to Kazakhstan and National CompanyAstana EXPO2017 and by Florian Bailly, organizer of the The Sun Trip ride.

Raf Van Hulle is the creator of the Solarwind concept. According to the website of the company, in addition to building energy-saving homes, he designs low-energy interiors and sports and mobility-related products.

Adrien Dugoujon is expected to be the third rider to arrive, but still will need to resist the challenge from the Czech team, that is on the road again after a big technical breakdown.

Journey to Renewable Energy Association President Florian Bailly masterminded the race, which he hopes will generate interest in renewable energy and energy conservation policy and promote alternative energy access for all.

The riders’ bicycles have electric motors powered by solar panels worth 8,000 euros. Each bicycle has an attached trailer with two solar panels and two lithium batteries for powering the motors. The motors allow riders speeding up without pedalling faster.

The capital of Kazakhstan, Astana, is located approximately7,500 kilometres (4,660 miles) from the French border. After a distance of 5,000 kilometres in the European part of the continent, the participants entered into a more rugged zone in Kazakhstan where they were traveling an unpaved roads. Their experience in Kazakhstan’s open spaces was reflected in one of the riders’ recent blog posts, which was titled, “Steppes: The Experience of the Emptiness.”

As the website of the project says, “All adventurers are going to have to go through more than 2,000 kilometres alone with nature, in Russia and especially in Kazakhstan. Here their system of solar reload will be effective, but they especially need to be mentally strong to be able to conquer nature, avoid heatstroke and to know where to find some water.”

Indeed, the vast lands of Kazakhstan are not only picturesque, but also dangerous for the unskilled traveler. Even Raf Van Hulle suffered, by choosing to pass by the shortest route between Atyrau and Aktobe. He was really afraid to break his bike along this rugged, unpaved road.

The ride kicked off June 15 from Savoy, France to Astana on solar-powered bicycles at the National Institute of Solar Energy Savoy Technolac.

During the trip, stops in the cities of Venice, Sofia, Bucharest, Odessa, Istanbul, Sochi, Baku, Atyrau and Aktobe were planned. Each participant chose his own route. The entire trip will cover about 6,000-7,000 miles, depending on the chosen route, and will take most riders two to three months to complete. The majority of cyclists are expected to reach Astana in August and will be welcomed by residents of the capital.

The project is officially supported by the former economy minister of France and President of the Savoy region Herve Gaymard; European Union Commission Member Michel Barnier; Olympic champion and Member of the International Olympic Committee Jean-Claude Killy; TV star and President and Founder of the Fondation Nicolas-Hulot environmental organisation Nicolas Hulot; Olympic champion Alexander Vinokourov and the Embassy of Kazakhstan in France.

Among the partners of The Sun Trip are EDF (the French national electricity company); INES (French Research Centre for Solar Energy) and ADEME (the French government agency for the use of alternative energy), among others.