By Dana Borumbayeva in International on 24 July 2013

SRINAGAR, JAMMU AND KASHMIR – The newly recreated and rejuvenated Silk Route will help foster stability and development in Central Asia, international and regional experts agreed during a conference here in late June and early July as they looked at concrete ways to rebuild the ties that once connected huge areas of Eurasia into one large trading network. 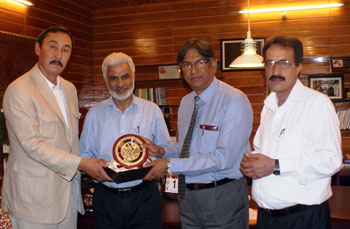 The conference on “Cooperative Development, Peace and Security in Central Asia: Challenges and Prospects” brought together experts from India, Uzbekistan, Kyrgyzstan and Kazakhstan, including a delegation from Astana’s Centre for Military and Strategic Research (CMSR) led by its president, Bakhytzhan Abdiraiym.

“There is perhaps no field of life where we do not possess similarities,” he said.

“Our culture, heritage, languages, architecture, eating habits and religion have similarities,” Omar Abdullah said on the need to re-discover a Silk Route to re-link Jammu and Kashmir with Central Asia and open a new chapter of socioeconomic development.

Since February 23, 1992, when diplomatic relations between India and Kazakhstan were established, the two countries have cooperated closely in many fields. Since January 24, 2009, relations have been characterised as a strategic partnership. In April 2011, the two governments signed a joint plan of action on developing a strategic partnership road map. In his report, Bakhytzhan Abdiraiym also stressed that “taking into account the global processes occurring in the modern world, special attention should be paid to bilateral cooperation and economic interaction. Economy is a key to the intensification of Kazakhstan-India cooperation.”

Khurshid has stressed the need for cooperation in the energy sector and referred to the Silk Route and the possibility of developing more links through Afghanistan and Iran. “We are looking at re-energising the National North-South Corridor to connect India with Central Asia and Russia through Iran. We are looking at trans-Afghan routes using the Iranian port of Chahabar, particularly to get access to Afghanistan, Uzbekistan and Tajikistan. We are looking at a rail link from Kazakhstan to Turkmenistan, into Iran. We hope that within our philosophical approach of being friends, we get Afghanistan back to a stable situation.”

International experts will be keeping a watchful eye on Afghanistan’s development and its future course after the withdrawal of the majority of international military forces in 2014. The national economy of Afghanistan is almost entirely dependent on foreign aid, so the main focus of foreign economic activity of its government is attracting international investment and financial and economic assistance. Conference experts emphasised the need to develop Afghanistan’s trade relations with Central Asian countries, so that trade could become the primary economic platform and bridge between Afghanistan and Central Asia and support not only economic interaction, but political exchanges as well. Obviously, countries of the region are interested in the political stability of Afghanistan, especially the states of Central Asia.

Dr. Sanjay Kumar Pandey from Jawaharlal Nehru University noticed Kazakhstan’s policy of active support in Afghanistan during and after Kazakhstan’s chairmanship in the Organization for Security and Cooperation in Europe (OSCE). The policy has provided free education for 1,000 Afghan students in Kazakhstan. President Nursultan Nazarbayev of Kazakhstan is increasingly interested in resolving the situation in Afghanistan, including through the implementation of humanitarian projects, Dr. Pandey added.

Participants of the conference also discussed the role of strategic partnership between Kazakhstan and Uzbekistan as regional players in strengthening stability in Central Asia. Recent mutual visits by the two countries’ presidents opened a new round of bilateral relations as well as talks about regulating the situation in the region. Experts noted a provision of the Kazakhstan 2050 Strategy which states: “We should continue to be aware of our responsibility for regional security and to contribute to the stabilisation of Central Asia… Intra-regional integration is the best way to stabilise Central Asia.”

The ATOM Project, launched by President Nazarbayev in August 2012, generated a great deal of interest as well. Kazakhstan is famously one of the first countries in the world to voluntarily rid itself of nuclear weapons.

Dr. Punit Gaur from the Centre for Research in Rural and Industrial Development reported on the nation-building process in post-Soviet Kazakhstan and noted that the contemporary Kazakh identity is being formed through the fusion of various disparate elements drawn from the Kazakh people’s nomadic and Islamic traditions, as well as from the Russian heritage of the Tsarist and Soviet periods.