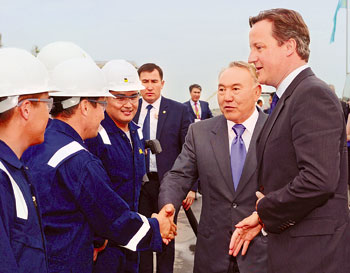 Nazarbayev and Cameron attended a ceremony launching the Bolashak oil and gas processing plant. Speaking at the ceremony, Nazarbayev congratulated everyone on the launch of one of the key industrial facilities of the North Caspian Project which develops the mammoth Kashagan offshore oil field.

“Eight years ago, we laid the first stone in the construction of a unique complex installation, giving the plant the name Bolashak (Future). We were moved by the strong belief that it will become a symbol of the prosperity of the future of Kazakhstan. Today, one of the most significant milestones has been reached on the way to accomplishing this goal,” the president said.

The president emphasized that the Bolashak plant is one of the biggest industrial facilities in the country.

“Its design capacity produces 450,000 barrels of oil and 8.8 million cubic meters of gas per day. The launch of the plant has created more than 2,500 jobs. The development of Kashagan opens a new stage in the oil and gas industry of Kazakhstan. The North Caspian project is an example of efficient international cooperation,” the president added.

The president emphasized that new technological breakthroughs will serve as a basis for increasing prosperity for current and future generations of the two countries.

“The economy of Kazakhstan already benefits from the development of Kashagan. More than 2,600 domestic companies have earned preliminary qualification at the project. Last year, the proceeds of Kazakh manufacturers within the North Caspian Project totalled approximately 1.5 billion U.S. dollars. I would like to place special emphasis on the environment aspects of the development of fields under the North Caspian Project. Being one of the biggest oil-bearing regions of the world, the Caspian region attracts many investors. However, we should keep in mind that the Caspian Sea is a special natural zone with a unique diversity of flora and fauna. The inviolable duty of every mineral developer is to take care of its fragile ecosystem,” the president said.

The president also noted that one of Kazakhstan’s top priorities generally is the development of alternative, sustainable energy sources and clean technologies. “We have recently approved the concept of Kazakhstan’s transfer to a green economy. It aims to optimize the use of natural resources in all spheres of life. We expect that the members of the North-Caspian consortium will continuously implement environment protection measures,” Nazarbayev said.

Nursultan Nazarbayev emphasized that the decision to develop the North Caspian shelf was made two decades ago.

“Today, I can confidently state that it was the only right decision. Kashagan development has given a powerful impetus for the economic growth of the country. It has also helped to strengthen the image of our young state in the international arena. Having invaluable importance for the future development of Kazakhstan, the North Caspian Project will make a great contribution to global energy security,” the president said.

In summary, the president thanked foreign partners, engineers and everyone who took part in the implementation of this large-scale project.

David Cameron, in his turn, said that the Kashagan project was a symbol of development of the oil and gas sector of Kazakhstan.

“Its impressive scale is an additional indicator of the country’s potential. I am pleased to note that the British company Shell took part in the realization of the project. Companies of the United Kingdom have the advanced technology to conduct elaborations in difficult environmental conditions, for example, the North Sea. And they always try to find local partners to work together,” said Prime Minister Cameron.

Cameron expressed confidence that the two countries can develop trade and economic contacts and ensure the flow of investment.

“Nuclear disarmament, improving the welfare of Kazakhstan, the diversification of the economy are real achievements of Kazakhstan. And we want to be a partner, not only interacting in the oil and gas industry, but also promoting cooperation in the field of education, culture and other areas that are of strategic importance for Kazakhstan,” Cameron said.

The Bolashak plant will process oil and gas extracted at Kashagan field. The plant is designed to gradually increase the production capacity for preparation of commercial quality oil to 450,000 barrels per day.