WASHINGTON – Kazakhstan’s Minister of Foreign Affairs Erlan Idrissov began his visit to Washington on July 8 and 9 to touch base with U.S. officials such as National Security Advisor Susan Rice and Secretary of Defense Chuck Hagel on bilateral relations and international issues, including the security in Central Asia and the future of Afghanistan after the drawing down of Western military presence there. 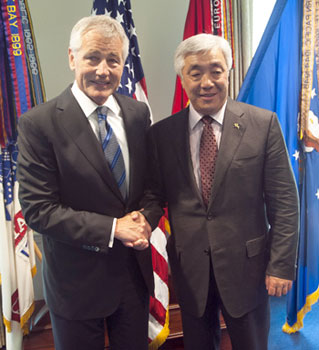 Minister of Foreign Affairs Erlan Idrissov (right) met US Secretary of Defense Chuck Hagel in Washington, DC, on July 8 to discuss crucial issues on the international agenda, including the security in Central Asia post-2014.

In a July 8 meeting with Secretary of Defense Chuck Hagel, Erlan Idrissov noted the fruitful work of the defense ministries of the two countries under the 2013-17 five- year cooperation plan and stressed the importance of continued cooperation in military education, military and technical assistance and cyber security. To promote the cooperation further, Idrissov and Hagel agreed to consider mutual visits by the defense ministers of the two countries.

Kazakhstan, along with its neighbours in Central Asia, is a key part of NDN, which has helped the U.S. to move military equipment in and out of Afghanistan over the past several years. The significance of the network will only increase as the volume of cargo moved out of Afghanistan grows exponentially over the next few months.

Chuck Hagel, in his turn, praised Kazakhstan for its support for the coalition in Afghanistan and for hosting the NDN. According to the Pentagon, “Secretary Hagel reiterated the Defense Department’s desire to continue working with Kazakhstan to further develop the bilateral security relationship. He also reaffirmed the United States’ enduring commitment to security in Afghanistan and the region beyond 2014. Secretary Hagel ended by affirming that our two nations will continue to work closely together to advance our common interests around the world.”

Idrissov also met the new U.S. Trade Representative Michael Froman to discuss the exports to Kazakhstan of certain food staples, cooperation under the Trade and Investment Framework Agreement (TIFA) as well as Kazakhstan’s accession to the World Trade Organization. Idrissov noted Kazakhstan has done a lot of work to meet WTO requirements and is hoping to join this organization soon.

Also on July 8, Erlan Idrissov addressed a round table on Kazakhstan’s foreign policy which was organized by the Atlantic Council and which brought together prominent scholars and dignitaries such as former national security advisors Zbigniew Brzezinski and James Jones as well as the serving Undersecretary of State for Economic Growth, Energy and Environment Robert Hormats. According to Hormats, key interests of the two countries fall in line and Kazakhstan is not only an emerging economy, but has been strengthening as a regional power and a driving force for development in Central Asia.

During the visit, officials announced the launch of the five-year bilateral visa arrangement effective from August 1, 2013. The new arrangement will allow citizens of both nations to apply for five-year multiple entry visas. Among those who might enjoy this the most are academicians, scientists, students, researchers, and business people.

While in Washington, Foreign Minister Idrissov also met members of the U.S. Congress, leadership of the Department of Energy and Undersecretary of State for Political Affairs Wendy Sherman.

During the visit, a second meeting of the bilateral Strategic Partnership Commission took place to address a range of issues on the bilateral agenda.

Erlan Idrissov also held a round table with the heads and representatives of leading US companies who are working in Kazakhstan or are interested in establishing business relations. The foreign minister stressed that the Strategy Kazakhstan 2050, as a long term and clear plan, makes the country a predictable and solid business partner. He also focused on Kazakhstan’s efforts to develop green economy calling on leading U.S. companies to support the development of relevant infrastructure and technologies in Kazakhstan as well as to participate in the upcoming EXPO 2017 in Astana.

Already, San Ramon, CA-based Chevron, one of the world’s largest energy companies, is going to build a wind farm near Ereimentau in Akmola region about 150 kilometers east from Astana. The wind farm is expected to be completed by 2016.

Foreign Minister Erlan Idrissov’s visit to Washington was set to continue on July 10 with more meeting with U.S. and international officials. (Please see our website for updates on this story.)

Kazakhstan and the United States established diplomatic relations in December 1991, a few days after Kazakhstan formally declared its independence. The relations span areas such as nuclear disarmament and non-proliferation, energy, security in Central Asia and beyond, science and technology cooperation, as well as efforts to promote regional economic development.

U.S. companies such as Chevron and ExxonMobil are some of the largest investors in Kazakhstan, while in recent years companies such as General Electric and Microsoft have seen their business in the country expand. Overall, the U.S. is one of the largest foreign investors in Kazakhstan having invested more than US$ 24 billion since 1992. Trade between the two countries amounted to US$ 2.6 billion in 2012. The two governments put much effort into promoting business activity in agriculture, green economy, and facilitating economic cooperation by continuing institutionalizing the bilateral partnership.

The political dialogue between the two countries is quite active at all levels. Presidents Nursultan Nazarbayev and Barack Obama most recently met in Seoul in March 2012 when the Kazakh leader famously presented his U.S. counterpart with a tumar, a hand-made Kazakh talisman, wishing him luck in the election.

Last month, in a letter to President Nazarbayev, President Obama assured his Kazakh colleague of the continued U.S. engagement in the region and in Afghanistan even after the withdrawal of the majority of American troops from that country. The American leader also thanked the Kazakh President for his contribution to global nuclear security and proactive stance in facilitating dialogue and cooperation in the region.

After the visit the following joint statement was released:

Security Cooperation: Kazakhstan and the United States affirm their continued collaboration in support of stability in the region, including through our joint efforts on counterterrorism. Our commitment to security cooperation is demonstrated by activities such as U.S. support for Kazakhstan’s peacekeeping brigade and the annual military exercise Steppe Eagle.

Democracy and Development: Kazakhstan and the United States reaffirm the importance of democratic development and efforts to strengthen representative institutions such as an independent media and local self-government. Both sides acknowledged the importance of a vibrant and varied civil society during the Strategic Partnership Dialogue roundtable on governance and human rights with non-governmental organizations. The United States welcomes Kazakhstan’s efforts to establish a national development assistance agency, KazAID.

People to People Contacts: Kazakhstan and the United States affirm their commitment to increase people-to-people contacts between the countries. In this regard, both governments look forward to introducing five-year visas on a reciprocal basis for diplomatic, official, student, media, business, and tourist travelers from Kazakhstan and the United States.