ASTANA – A year ago, Café Scientifique, a public initiative to create new ways of relating to science, appeared in Almaty. The initiative has been a great success here so far and is connecting people interested in issues in the sciences.

Café Scientifique was first organised in the late 20th century in Leeds, England. From there, cafes spread across the country. These meetings were never intended to be like lectures, so they were held in bars, restaurants, cafes and even theatres. The idea was to go beyond the traditional academic context. Scientists and writers attended to present their work, debate and discuss the latest news from the world of science. The informal atmosphere helps make science accessible and promotes public engagement with scientific issues.

Café Scientifique is open to everyone who wants to explore breakthrough ideas in technology and science or share new research results. Café Scientifique finally arrived in Kazakhstan in April 2012, bringing together leading thinkers in an easy-going style over a cup of tea or coffee in Almaty. After several successful sessions, Café Scientifique called for Astana residents. The Astana Times spoke to Café Scientifique organisers in Almaty and Astana, Dina Iglikova and Aigerim Khafizova.

Why did you decide to bring Café Scientifique to Kazakhstan? What was your main intention?

Iglikova: I knew about Café Scientifique. It was really popular in the UK and I thought that Almaty residents would like it, because it was a good, fresh idea; something new that had never been organised before. Apart from that, there are a lot of topics discussed by everyone, but that only a few people truly understand. At Café Scientifique you can get answers to your questions and get closer to the world of science.

How did the public react to the first event?

Iglikova: It was successful! People really liked it. Since then, we’ve been organising meetings at least once a month.

Is it difficult to find experts, scientists or enthusiasts to give speeches? Do you invite foreign guests?

Iglikova: The only problem is finding a suitable time, because scientists have to work a lot, most of them come and go on business trips to collect data for the research they are working on. It takes some time to contact them and arrange for a visit. So far, I’ve only invited our local scientists, because it’s an unpaid voluntary meeting, where people just share ideas and tell about complex subjects in a conversational style.

When did the first Café Scientifique session in Astana take place? 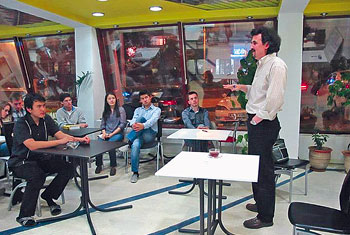 Rustam Burnashev (standing), a leading expert on Central Asia, talks about principles of regional cooperation during a Cafe Scientifique session.

Khafizova: We presented this new scientific format in January of this year. There aren’t that many social events going on in Astana, so it was the right time to bring Café Scientifique to the capital.

Where are the venues for Café Scientifique in Astana and in Almaty?

Khafizova: Café Scientifique in Astana holds its meetings at Anti-Cafe. In Almaty we usually meet in the Prostranstvo L.E.S. cafe.

Could you please describe the audience?

Iglikova: Our participants and guests are all completely different. You can see bachelor’s and master’s students, businessmen, representatives of non-profit organisations, experts and office workers.

What are some of the most interesting topics you have discussed in Café Scientifique?

Iglikova: For me, it was one of the first sessions, dedicated to hormones. The topic was “The hormones are the power behind the throne.” We had a really exciting conversation with Dr. Sain Bakhretdinov, who is an endocrinologist and a member of International Endocrine Society and the European Diabetic Association.

Khafizova: I think all our topics are interesting. One of them was about secrets of the universe. We invited an astrophysicist, Dr. Kazbek Baktibekov, who revealed some new and interesting facts about black holes and explained what the term “expanding universe” means.

Where can people find information about upcoming Café Scientifique meetings?

Iglikova: Mostly on Facebook. We have an official page, where you can find useful information about Café Scientifique itself, new meetings and descriptions of topics that we have already discussed.