Speaker of the Senate of Kazakhstan’s Parliament Kairat Mami took part in the 22nd session of the Parliamentary Assembly of the Organization for Security and Cooperation in Europe (OSCE), held from June 29 to July 3, and has pledged his country’s full support for the Helsinki+40 Initiative to strengthen the organization. 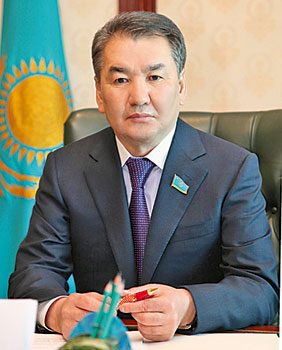 “Today in Istanbul, the OSCE parliamentarians gathered to discuss the future of our organisation and the process of its adaptation to modern realities,” Mami noted in his address to the assembly.

“I find the fact that our parliamentary forum is taking place in Istanbul very symbolic. It was here, 14 years ago, that the OSCE Istanbul summit participants adopted the Charter for European Security, thus summarising the discussions on the security model for Europe in the 21st century,” Mami added, referring to the Charter for European Security signed on Nov. 19, 1999. It took a number of important steps toward strengthening the OSCE’s ability to prevent conflicts as well as its capacity to settle conflicts and rehabilitate societies ravaged by war and destruction. The Charter for European Security lists a number of challenges to OSCE participating states, such as armed conflicts, international terrorism, organised crime and economic and environmental problems. It reaffirms the full adherence of all participating states to previous OSCE documents, which represent their common commitments.

In 1975 in Helsinki, 35 states signed the Helsinki Final Act, which laid the foundation of the general concept of European security and a framework for cooperation in three key dimensions, or so called “baskets” of the activity of what was then known as the Conference for Security and Cooperation in Europe (CSCE). Its adoption was a historical event promoting the eventual end of the Cold War and normalisation of relations between East and West.

“After 40 years, the Helsinki Final Act has not lost its relevance and continues to have a positive impact on the development of world and regional policy. In this light, the initiative of the Irish Chairmanship of the Helsinki+40 takes on a special importance. I would like to note that Kazakhstan supports this initiative and considers it an important step on the path to improving OSCE efficiency,” Mami said.

According to Mami, the main direction of Helsinki+40, a process for strengthening the OSCE through 2015, the 40th anniversary of the Helsinki Final Act, should be activity supporting putting into practice the Astana OSCE Summit Declaration 2010 on the construction of a Euro-Atlantic and Eurasian community of common and indivisible security. Kazakhstan proposes creating a platform within which various regional organisations including the OSCE, NATO, the CSTO (Collective Security Treaty Organisation) and others can jointly and concertedly address security issues in Eurasia.

“In the second dimension (of economic security), Kazakhstan stands for the need to adapt the Maastricht Document 2003 to modern realities and challenges. The focus of the OSCE should be transport issues, effective governance, the fight against corruption, management in the field of migration, efficient use of water resources and environmental safety,” Mami said.

He drew the attention of members to the Green Bridge programme, an international initiative by Kazakhstan to develop cooperation between Europe, Asia and the Pacific to achieve an economically sustainable and environmentally viable future of these regions.

The Maastricht Document was adopted at the plenary session of the 11th OSCE Ministerial Council in Maastricht, held from December 1 to 2, 2003. The economic and environmental strategy was based on an assessment of the current situation and of existing threats to security in those fields. Taking into account the OSCE’s strengths, it outlined the main objectives, principles and methods of cooperation in economic and environmental areas.

As Mami further noted, the main challenge to security in the OSCE area is the crisis of confidence among the countries of the region. Here, the focus should be, above all, on the restoration of trust.

“Of course, the results of the process to restore confidence fully depend on us and our willingness to move in this direction. Strengthening political will and trust should be our common and shared mission,” he said.

Mami led a group of members of both houses of Kazakhstan’s parliament on this visit, including Ikram Adyrbekov, Maulen Ashimbayev, Rashid Akhmetov, Adil Akhmetov, Svetlana Bychkova and Kuanysh Sultanov.

During the session, members of the Kazakh delegation had meetings in the Political and Security Committee; the Committee on Economic Affairs, Science, Technology and Environment and the Committee on Democracy, Human Rights and Humanitarian Affairs.

The main subject of the forum was developing the Helsinki+40 initiative aimed at strengthening the OSCE. The Helsinki+40 process provides an opportunity to review the progress made since the signing of the Helsinki Final Act, address shortcomings in achieving its aims – both as individual participating states and as an organisation – and focus on practical ways to apply OSCE principles to meet 21st century challenges.

At the Dublin Ministerial Council on December 6 and 7, 2012, it was decided to start the Helsinki+40 process, which required the efforts of all participating states to provide a strong and continuous political impulse for activity in the OSCE community towards the anniversary in 2015. The document guiding the process also states that the foreign ministers stressed that the anniversary represented a unique opportunity to confirm the adherence of participating states to the concept of comprehensive, cooperative, equal and indivisible security; highlight the practical results of active efforts to fully implement OSCE commitments and develop achievements in all three dimensions; and respond to the challenges of the 21st century.

This year, Ukraine holds the rotating one-year chairmanship of the OSCE with the ministerial council expected in early December in Kyiv.