SHYMKENT – A new joint Kazakh-German venture to develop green energy in southern Kazakhstan has been established in the South Kazakhstan oblast. 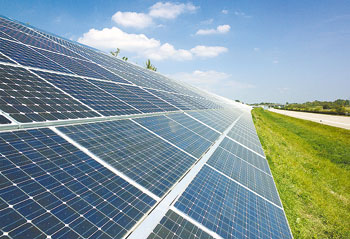 In Shymkent, leaders of the South Kazakhstan oblast have signed documents with German investors on the creation of Ontustik Green Energy, a new company 51 percent owned by the German company Promodis Energy and 49 percent owned by Innovation Shymkent LLP.

The new company is the result of agreements reached during a recent visit of a business delegation led by Askar Myrzakhmetov, Akim (Governor) of the South Kazakhstan oblast, to Germany, where they presented the region’s investment opportunities. The trip resulted in contacts, potential partners and a preliminary agreement to create a joint venture to implement a number of projects related to the development of renewable energy sources.

Promodis Energy Company has a 300-year history and has been engaged in energy-saving projects throughout.

“Solar activity in Shymkent is very good, and we have also found areas here that are ideal for the construction of solar energy stations,” said head of Promodis Energy Brentrup Berthold Franz. “We want to develop green energy in several directions, including building a solar station of 200 kilowatts on one of the mines.”

The investors plan to develop alternative energy in several areas. As a pilot project, they intend to install a solar power plant to generate 88.3 kW of power and LED lighting in secondary school No. 87 in Samal district. This will save more than 300 million kilowatt-hours of energy per year and reduce the government funding of the school by 9.3 million tenge per year. Street lights with LED lamps and solar panels will be installed in Nursat microdistrict and in the 20 Years of Independence Park to gauge the savings they can effect. It has been estimated that 184,000 kW/h of electricity will be saved annually.

The investors have also offered to implement the “1,000 roofs project,” which involves the installation of solar panels on the roofs of private houses. Total expenditures for the project will amount to six thousand dollars per unit, the payback period will be 5-7 years and the panels can work for a quarter century. Regional authorities are interested in the proposal and citizens will be able to lease equipment through the Maximum Regional Investment Centre and JSC SEC Ontustik.

The first solar plant in the region with a total capacity of 100 MW is expected to be launched this year. It is assumed that the total volume of investment in the project will reach 37.5 billion tenge. A plant for producing LED lighting equipment with a capacity of 250,000 units per year will also be built in South Kazakhstan this year. Its cost is estimated at half a billion tenge. Another enterprise for the assemblage of invertors-converters for renewable energy facilities is in progress. In addition to energy, more than 100 jobs will be created by the two plants.

The regional government has already decided on the allocation of land for the new industries and engineering infrastructure. The region is also responsible for training personnel; the German partners will attract experts and engineers from Germany.

The oblast administration estimates that if all the planned projects are implemented, the region will be able to completely solve its electricity shortage. The projects planned for the nearest future will reduce the energy deficit in half.