ASTANA – Children and teenagers in Kazakhstan have a new way of accessing the wider world through the Young Travellers’ Club, an Internet portal of the International Children’s Geographical Society. The Young Travellers’ Club is a platform for communication between members of the International Children’s Geographical Society, as well as a source of information in Kazakh, Russian and English, including research documents, links to educational films, discussion forums and reviews of geographical technology. 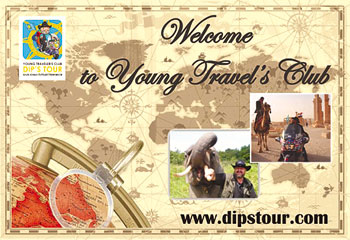 According to the developers, “The programme can become a key tool in the modernisation of the education system in Kazakhstan… and for expanding the use of interactive forms of learning in the educational process.”

The programme itself is a response to a September 2012 lecture by President of Kazakhstan Nursultan Nazarbayev, “Kazakhstan on the way to a knowledge society,” in which he emphasised the pressing need for a developed educational system capable of preparing students for international as well as local challenges.

The International Children’s Geographical Society and The Young Travellers’ Club developed as part of this programme are designed to integrate information resources in the field of education, to show the importance of geographic thinking from an early age and to promote geography, as well as to implement an active after-school programme to develop the geographical knowledge of children and teens of Kazakhstan.

Members of the International Children’s Geographic Society will be able to communicate through blogging, publishing their own stories, articles, photos and videos.

Young “travellers” will be able to explore the world’s countries and continents, the lives of people inhabiting them and the history of their development, as well as keep track of new discoveries of global importance. The ubiquity of computer technology, developers think, means young people will be more receptive to information received this way.

“Our children are our future. They will become active members of our sovereign country. The main purpose of the platform is to create an effective platform of extensive knowledge in the field of geography, tourism and international relations from the school age. It is intended to nurture future engineers, chemists, biologists and other representatives of the sciences, of which, the president noted, we currently don’t have enough. Giving children the opportunity to explore and understand the geographical and historical features of their native Kazakhstan means growing patriots and worthy representatives of our country’s political, economic, cultural, international and scientific interests. It means creating a solid scientific layer on which the entire economy of Kazakhstan will be based,” Petrukhin told this reporter in an interview.

The educational children’s magazine, “Around the Earth,” developed as a part of the Young Traveller’s Club, aims for a balance between play and learning. People, places, traditions and discoveries are depicted in stories and colourful illustrations. Issue by issue, the magazine acts as a guide to the countries of the world. Poems and stories of the peoples of the world, recipes of national dishes, assignments, quizzes and competitions will appear in every issue.

The project also includes series of children’s books, “Adventures Around the World,” which describe journeys to distant lands. Each series includes the story of a journey, colourful drawings and photos, historical and and geographic facts and educational games and quizzes adapted for children in preschool and primary school.

“Currently we are developing a new direction called ‘Young Mountaineer,’ which will become a separate branch of the International Children’s Geographical Society and of the Young Travellers’ Club” Petrukhin said. “We plan to organise entertaining lectures about climbers conquering famous peaks… and, under the guidance of professional instructors, orphanages will be able to visit popular tourist routes and discover more of the little-known corners of our country.” He added that each expert of the team of trainers has experience in active tours and expeditions.

The interactive education project was created by the following scientists of the Geographical Society of Kazakhstan: Director of the Margulan Institute of Archaeology and Professor at the National Academy of Sciences of Kazakhstan Karl Baipakov; Professor of the Department of Tourism of the Al-Farabi Kazakh National University Stanislav Erdavletov; Director of the Research Institute of Tourism Professor Vladimir Vukolov; Adviser to the Minister of Tourism and Sports Professor Evgenii Nikitinsky; Vice Rector of the Kazakh Academy of Sport and Tourism Professor Alexander Makogonov; President of the National Foundation of Mountaineering Kazbek Valiyev; Head of Tourism and Service of the Turan University, Associate Professor Kanat Samarkhanov; member of the German Archaeological Institute, Professor Victor Seibert.