By Anel Adilbayeva in National Overview on 26 June 2013 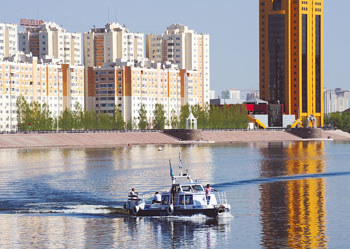 Locals and guests of the capital will have an opportunity to enjoy the new expanded Yessil river navigation route soon.

ASTANA – The Yessil River that curves through the capital has been undergoing consistent development to lengthen the navigable route and expand the options for river transport. This year’s navigation season opened on May 15th with a waterway length of 6.6 kilometres and an expanded navigation season. “Compared to last year, the navigation period has changed. We will run until late October, if the weather conditions allow us,” Director of SCE Yessil Astana Kanat Yerekeshev told reporters. Veterans and children with disabilities were the first passengers to take to the water.

“It is a real holiday for me and an amazing experience,” local boarding school student Arman Kalambayev said to a local newspaper.

Three passenger vessels ply the river: Fontanka, with 65 seats; KS 110-32, with 30 seats, and KSW-082 with 45 seats. Three moorages, Astana Park, Chubary and Time of Year, as well as the floating docks Samal, Kenesary and Radisson, located along popular routes, aim to make it convenient for passengers to board Yessil-Astana boats. SCE Yessil-Astana now has six boats, as it acquired three new ones last year: a motorboat that seats 35 passengers bought in Germany and towing and cruising launches from Russia. Prices for a ride are 700 tenge (about $4.60) for adults and 350 tenge (about $2.40) for children from seven to 16 years old.

According to Deputy Chief of the Centre of Passenger Transportation of Astana LLP Zhomart Daumenova, more than 22,000 people, of which about 15,000 were children, were transported on the river last year. That number is expected to increase this year.

River cruises are especially popular with wedding parties. “We have chosen to take a tour on the river because it’s something that isn’t just the ordinary way of taking pre-wedding photos. It’s more traditionally accepted to drive across the city and take pictures with the symbolic buildings of Astana in the background. Both ways are good, but if you’re looking for something new, you can try the boat,” newlyweds Yerzhan and Assel said.While currently the route around the capital is only a cruising option, it could become a major transportation artery. The Yessil has been expanded greatly as part of the plan for developing the capital. The river is currently being deepened in order to accommodate river transport; the navigation route is planned to eventually reach 18 kilometres.