ALMATY – SEMEY – President of Russia’s Republic of Tatarstan Rustam Minnikhanov and State Counsellor Mintimer Shaimiyev, a former president, visited Kazakhstan to attend celebrations of the Tatar traditional holiday Sabantyi, celebrated in the summer during a break in farm work between spring planting and autumn reaping. The holiday traditionally includes sports competitions such as wrestling and other fighting, horseback riding, pot smashing, and other feats of strength and skill. 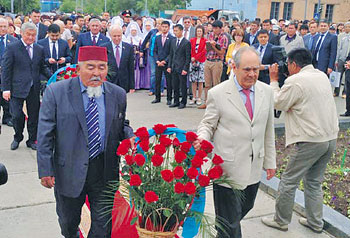 Honourable guests from Kyrgyzstan, China, as well as the Altai and Omsk oblasts of the Russian Federation attended the traditional Tatar holiday Sabantyi to support the celebrations.

Almaty’s Sabantyi festival was held at the International Ski Jumping Complex, one of the newest and best international ski jumping facilities in the world. A theatrical performance organised with the participation of the Bugulma district of Tatarstan was held on the grass of the finishing area in front of packed stands. After the performance, Olympic silver medalist in freestyle wrestling Guzel Manyurova raised flag of Sabantyi, symbolising the start of the holiday.

“I have never seen such a beautiful place provided for Sabantyi,” said President Minnikhanov in an interview with local media. “I think that our Bugulma district is representing Tatarstan honourably.” President Minnikhanov also expressed his gratitude to activists from the ethnic and cultural societies of Almaty for their efforts to preserve the culture, language and customs of the Tatar people. “Sabantyi is one of the best ways to preserve the uniqueness of the Tatar nation all over the world. The holiday is celebrated in 55 regions of Russia and in 23 countries worldwide,” he said.

The president of Tatarstan and the mayor of Almaty, Akhmetzhan Yessimov, gave letters of appreciation to activists from Tatar ethnic and cultural associations.

In his welcoming speech, the mayor thanked President Minnikhanov for his assistance to the Almaty delegation that had previously visited the Tatarstan capital, Kazan.

“Winter Universiade 2017 will take place in Almaty, so it’s very important for us to gain from Kazan’s experience in preparing for a large-scale event like this,” the mayor said. Kazan hosts Summer Universiade this summer. He also noted that “What we saw is very useful for us in the creation of technology parks and development of information technology. We have to adopt and implement the best practices.” He added that members of the Kazakhstan delegation had a chance to discuss a number of issues and that security experts will visit Kazan as well, to study the experience of their Tatar colleagues.

President Minnikhanov said that friendly relations between the two nations’ leaders, Nursultan Nazarbayev and Vladimir Putin, create opportunities for cooperation which are also supported by the historical closeness of the Kazakh and Tatar peoples. 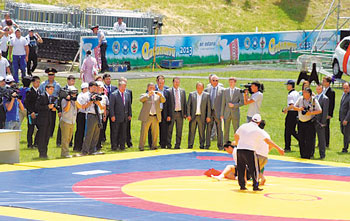 Kurash, Tatar national wrestling, competitions are a big part of Sabantyi celebrations: the winner of the holiday bout becomes the batyr or hero of the Sabantyi.

He also expressed his confidence in Almaty’s preparations for the Winter Universiade. “It would be difficult to find a better venue than Almaty for the Winter Universiade. I am confident that the Universiade will be held on the highest level here,” he noted. On the same day, State Counsellor Shaimiyev celebrated Sabantyi in Semey, in East Kazakhstan. Counsellor Shaimiyev laid flowers at the monument to Abai Kunanbayev and visited the Nevzorovs’ museum and the regional ballet school for gifted children. At the only Tatar art school in Kazakhstan, headed by Gabdulkhak Akhunzhanov, an honoured worker of culture of Tatarstan, honoured artist of Tatarstan and vice president of the Association of Tatars and Bashkirs of Kazakhstan, a conversation about the achievements of the school and its problems took place. The counsellor and former president was accompanied by Akim (Governor) of East Kazakhstan region Berdybek Saparbayev, Mayor of Semey Aybek Karimov, Chairman of the Executive Committee of the World Congress of Tatars Rinat Zakirov, Chairman of the Executive Committee of the Association of the Tatars and Bashkirs of Kazakhstan Rinat Abdulhalikov and other officials.

“Sabantyi is a traditional Tatar holiday and every year it is celebrated on a grand scale, not only in Russia, but throughout the world. This year, we were able to organise Sabantyi in 226 places, including small Tatar communities. This festival is primarily needed to establish and promote communication and friendship, to learn more about each other,” Counsellor Shaimiyev said at the opening of celebrations on Polkovnichii island.

Counsellor Shaimiyev also noted the strong feeling of tolerance in Kazakhstan, the economic indicators of the country and its growing role in the global arena, and attributed those qualities to the work of Kazakhstan’s president, Nursultan Nazarbayev.Akim Saparbayev, highlighting the multi-ethnicity of Kazakhstan and its promotion of unity and harmony, said, “It is encouraging that Sabantyi has become a beloved international holiday of our country.” He then presented Counsellor Shaimiyev with a collection of classic poems by Kazakh poet Mukagali Makatayev translated into Tatar by the Almaty poet Nazilya Usmanova.Counsellor Shaimiyev gave the title of Honoured Artist of the Republic of Tatarstan to Associate Professor of the Kazakh Academy of Music Damir Sultanov and to the director of the regional specialised ballet school for gifted children, Kamila Ismailova.

Delegations from Kyrgyzstan, China, Altai and Omsk oblast of the Russian Federation also came to Semey for Sabantyi. The Republic of Tatarstan was represented by Nurlatsky district, which brought a huge exhibition on the lives and traditions of the Tatars. The festival in Semey included Tatar food, performances of Tatar national songs, Tatar games and a photo exhibition.

In kurash, Tatar national wrestling, fighters use towels and try to knock down their opponents. Kurash competitions are a big part of Sabantyi celebrations: the winner of the holiday bout becomes the batyr or hero of the Sabantyi. Darkhan Zholamanov from Pavlodar won this year and received a new car, the keys of which were presented by Counselor Shaimiyev.