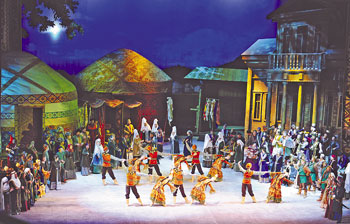 ASTANA – On June 21, the opera “Birzhan-Sara,” directed by Yuri Alexandrov, premiered at the recently opened Astana Opera Theatre with President Nursultan Nazarbayev and other dignitaries in attendance.

The opening coincides with the 100th anniversary of the birth of the opera composer, Mukan Tulebayev, and comes only shortly before the beginning of Day of the Capital celebrations.

President Nazarbayev congratulated attendees on the opening of the Astana Opera theatre, calling it “a priceless gift for the 15th anniversary of our capital.” 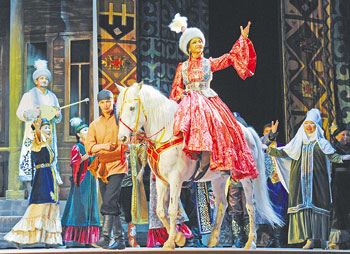 Artists who performed on the stage of Astana Opera Theatre amazed their first guests with their colourful costumes and emotional singing.

He thanked the architects and builders of the theatre, the largest in Central Asia. “Development of culture is a high priority for the country; Kazakh culture has to become a recognisable part of the global cultural heritage. This applies to all forms of contemporary art – music, theatre, cinema, literature and painting… We are building theatres, looking many years ahead,” the president said.

They staged “Abylaikhan,” by Yerkegali Rakhmadiyev, at the Abay State Academic Opera and Ballet Theatre together, a production for which they were awarded the Dostyk Order, Kazakhstan’s state award.

For this current production, Alexandrov studied Tulebayev’s notes and previous productions, and with the help of Kazakh conductor Abzal Mukhitdinov made some changes to the work, slashing and replacing parts in order to revitalise the classic opera and create a more gripping performance. Alexandrov also studied historical literature and worked with ethnographic museums to recreate the costumes of northern Kazakhstan in the 19th century. 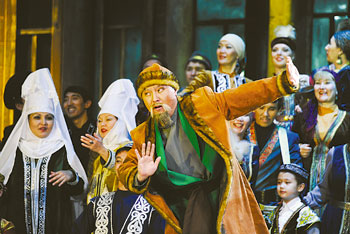