Astana and Moscow Form Foundation of Cooperation in Eurasia

A delegation from the Parliament of Kazakhstan was recently on an official visit to Russia, at the invitation of Chairman of the Federation Council Valentina Matviyenko. I believe this is a good occasion to share with readers thoughts on modern Kazakh-Russian relations, inter-parliamentary relations and Eurasian integration. 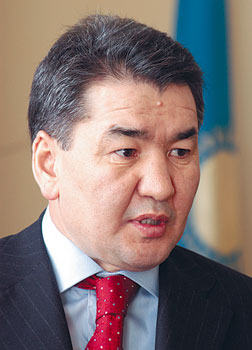 A lot is being said nowadays about the Eurasian integration project, especially in the context of the recently designated creation date for the Eurasian Economic Union (EEU) by the leaders of Kazakhstan, Russia and Belarus. Kazakh-Russian relations have been one of the pillars of the integration process from the moment the Soviet Union collapsed. For 22 years, we have been effectively addressing emerging issues of current and future cooperation, without politicising the integration process. Issues regarding Baikonur, the delimitation of the world’s longest land border, joint field development, transportation of energy resources, migration, the operation of military ranges, cross-border cooperation and myriad other subjects affecting the interests of our countries and the livelihoods of ordinary citizens have been tackled and solved collectively.

In our relations, issues of bilateral cooperation have always been resolved on the basis of a coherent approach, a very positive tradition. Because our cooperation is based on the political will and vision of the leaders of Kazakhstan and Russia, Presidents Nursultan Nazarbayev and Vladimir Putin, with the full support of our people, we successfully cooperate in all aspects of economic, military, political, cultural and humanitarian work as true allies and strategic partners.

This experience of constructive and mutually beneficial cooperation is something we have always sought to extend to a multilateral format. In 1994, at the Lomonosov Moscow State University, President Nazarbayev announced the idea of a Eurasian Union, and in October of 2000, the Eurasian Economic Community (EurAsEC) was established in Astana. Since January 1, 2012, the practical phase of the Common Economic Space (CES), with the participation of Kazakhstan, Russia and Belarus, has been underway.

Another important milestone in Kazakh-Russian relations is coming up: on July 6, Kazakhstan and Russia will mark the 15th anniversary of the signing of what is called “The Declaration of Eternal Friendship and Alliance, Oriented to the 21st Century.” The durability of this alliance has been tested repeatedly, a reality in a world where close partners are subject to the scrutiny of their societies. Critical understanding is an essential condition for multilateral integration processes, and we know that constant, lively debate about the direction and the nature of integration exists in Belarus and Ukraine, Kyrgyzstan and other CIS countries.

For us, one thing is clear: the alternative to integration is isolation. You cannot profitably integrate into the world market without being a full member of the regional market. Perhaps for some island states, such a choice is not entirely relevant, but for the peoples of the area of Eurasian integration and interaction, it is a vital issue. This is why in Kazakhstan, by promoting integration, we find support from other partners on the basic principles of cooperation which are the consensus and taking into account the interests of each member country. The bodies of the future union should have clear and real authority. But this should in no way imply a transfer of political sovereignty. We are building a union to further the economic development and prosperity of our peoples.

By promoting integration, we are prioritising pragmatism, trade and the economy. We must repeat this and make it crystal clear for both the domestic audience and our integration partners throughout the world, because there are many false interpretations and incorrect speculations on this matter.

These remaining doubts suggest that our states have yet to effectively communicate to all of our communities the obvious benefits, and general inevitability, of economic integration. Meanwhile, our businesses are gradually getting used to thinking on the scale of the Customs Union and the CES. Integration spurs entrepreneurs to greater competition; after all, products with high added value are unlikely to be competitive in the global market if they aren’t competitive in the region.

Global investors also realize that by penetrating one of the CU countries, they’ll gain access to the markets of all members. Therefore, President Nazarbayev has established a provision of effective economic relations in Kazakhstan in terms of the integration processes within the EEA and the forthcoming accession to the WTO amid the process’ central questions.

The sitting of the Supreme Eurasian Economic Council in Astana on May 29 this year was the next big step in advancing the integration process. May 1, 2015 has been designated as the date of the launch of the EEU. That event will, of course, be preceded by a great deal of work both on the political and expert levels. The parliaments of our countries should consider working toward a new qualitative stage of Eurasian integration a matter of priority.

In just the current parliamentary session, held from September of last year, 17 documents related to the activities of the CU and the CES were ratified or adopted by the Parliament of Kazakhstan. Much work has been done on the multilateral parliamentary level. The Inter-Parliamentary Assembly of the Eurasian Economic Community (EurAsEC IPA) has done significant work to harmonise integration processes within the Eurasian Economic Community, the CU and CES. In general, since the establishment of the EurAsEC IPA, more than 80 model laws have been adopted.

Parliamentarians need to conduct further work on the legal support for integration. I had the honour of chairing the assembly for the last two years. I am sure that the EurAsEC IPA has the potential to create a regulatory and legal framework for the future Eurasian Economic Union, and it is necessary to implement its experience.

As for Kazakh-Russian inter-parliamentary ties, they are also saturated with contact and interaction. In August 2012, Chairman of the Federation Council Valentina Matviyenko paid an official visit to Astana, during which we discussed a wide range of issues of inter-parliamentary cooperation. In addition, last year we established the Commission on Cooperation between the Senate of the Parliament of Kazakhstan and the Council of Federation of the Federal Assembly of the Russian Federation. At the third sitting of the commission, which was recently held in Astana, parliamentarians of the two countries discussed the prospects of cooperation in science and measures to improve that legal framework, as well as issues of cross-border cooperation and customs posts. Our legislators periodically synchronise their watches, so to speak, and address a variety of topics relating to livelihoods and bilateral cooperation.

I would like to note that Eurasian integration has a special conceptual meaning for Kazakhstan. The idea has become part of Kazakhstan’s ideology. The system of peacekeeping attitudes, social values based on respect, cooperation and mutual enrichment of cultures are the principles of integration, and already put into practice in Kazakhstan.

Our country has become a platform for international cultural dialogue. Ten years ago, at the initiative of President Nazarbayev, Astana hosted the first Congress of Leaders of World and Traditional Religions. Since then, four of these congresses have been convened. It is encouraging that representatives of the Russian Orthodox and Muslim clergy have become permanent members of the Astana inter-religious forum. We welcomed Kirill, Patriarch of Moscow and All Russia, within the framework of the congress in Astana in May 2012.

As the head of the Secretariat of the Congress of Leaders of World and Traditional Religions, I plan to hold meetings in Moscow with Patriarch Kirill and representatives of the Muslim clergy. Most of Russia’s majority Christian population is Russian Orthodox; its large Muslim population mostly follows the Sunni Hanafi school of thought practiced by most Muslims in our countries. Along with them, our states are home to many followers of other faiths. The clergy of Kazakhstan and Russia consistently interact, enrich each other and contribute to the perpetuation of tolerance and respect among representatives of different religions.President Nursultan Nazarbayev has clearly expressed Kazakhstan’s vision of Eurasia: “I am convinced that the 21st century should become the era of rebirth and a new golden age of Eurasia and its centuries-old traditions and principles. There should be no place for any clash of civilisations, nor for conflict between religions and cultures.” I am sure that Kazakh-Russian cooperation will continue to contribute to the successful embodiment of the Eurasian project for the welfare and prosperity of our countries and peoples.

The author is the Chairman of the Senate of the Parliament of Kazakhstan. This essay was originally published in the Rossiyskaya Gazeta on June 18, 2013.