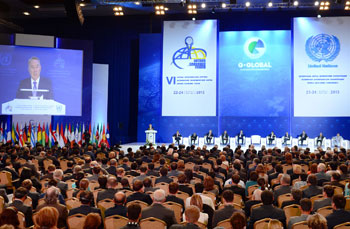 The President set the tone for the forum as he highlighted some of the economic challenges facing the world.

“The collapse of the Cypriot financial system made us doubt the approaching of an era of overall economic stability (following the global economic crisis). I know there are theories rejecting the relationship of the Cyprus incident with the global crisis. But this is a fact,” Nazarbayev said.

He noted that many problems of the global crisis have not yet been tackled and so the global economic crisis cannot yet be considered over. In fact, he told the assembled dignitaries, the crisis has entered a new stage, which will be accompanied by painful outbreaks of a number of local financial systems. “I believe this is the first lesson that should be learnt and taken into account in the formation of a global anti-crisis plan,” he said. Kazakhstan has successfully implemented its anti-crisis programme, which has helped preserve jobs and spur positive economic growth. But that has not been the case worldwide.

The President noted that one year ago he proposed a G-Global idea to positive response. The essence of G-Global is to propose positive alternatives to the chaotic dynamics of changing global paradigms as the world continues to develop.

“It is based on the unifying potential of five simple and clear principles: first, evolution and rejection of revolutionary changes in politics; second, justice, equality and consensus; third, global tolerance and trust; fourth, global transparency; fifth, constructive multi-polarity.”

The President recognized that a new type of global economy is emerging and that new principles of international relations and new values of public life are being approved. “Therefore, it is important to find the right solutions to global problems,” the President said as he concluded his opening remarks and wished success to the forum participants and delegates of the World Anti-Crisis Conference in their discussions and formations of solutions to the world’s economic issues.

Vuk Jeremic, President of the 67th session of the United Nations General Assembly (UNGA), also gave remarks during the forum’s opening. “I am happy to be back to what UNESCO has called ‘the city of peace’ (Astana),” he said. 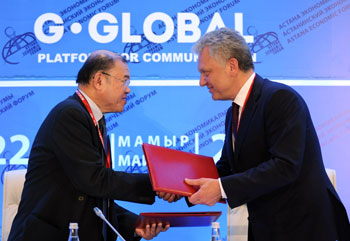 Viktor Khristenko, chairman of the Eurasian Economic Commission board (right), shakes hands with UNCTAD Secretary-General Dr. Supachai Panitchpakdi after the signing of an MoU between the two organizations in Astana.

Jeremic underlined that it is important that events such as the forum and the anti-crisis conference are taking place in Kazakhstan and noted the role of Almaty in furthering the activities of the United Nations (UN) in Kazakhstan and the region.

“Almaty is uniquely positioned to play a role as a hub for UN activities in the region,” Jeremic said. He also stressed the importance of forming recommendations to address global economic issues that take into account the specifics of individual nations. “The purpose of the Sixth Astana Economic Forum is to provide additional tools for all countries,” he said.

The President of the United Nations Economic and Social Council Nestor Osorio also told the participants that “there is a clear need for greater transparency.”

“Following the Forum about 80 agreements and memoranda for the amount of $2.7 billion were signed. Innovative technologies were attracted. Nobel laureates and other experts gave lectures at the universities,” co-chairperson of the coordination council of the Eurasian Economic Club of Scientists Association, member of the Senate of the Parliament of Kazakhstan Serik Nogerbekov said at the final press conference. Draft resolution with recommendations for G-20 was also following the Sixth Astana Economic Forum.

“This draft was actively discussed at G-Global communicative platform. Today, this draft has been adopted,” Nogerbekov concluded.

The World Anti-Crisis Conference, held at the initiative of President Nazarbayev and with full support of the UN General Assembly, is meant to elaborate the Global Anti-Crisis plan for the UN based on democratic principles and encompassing the interests of all countries. The WAC will be dedicated to the problems of the world financial system, which, since the beginning of the Great Recession, has been experiencing major changes, the scale of which has not yet been fully understood. The international community is still trying to rehabilitate financial channels for domestic and international growth. Discussions about development of economic and financial infrastructure are also part of the WAC agenda.