National Commission for UNESCO and ISESCO Reviews 2012, Prepares for 2013

By Natalia Kurpyakova in Culture on 29 May 2013

ASTANA – On May 17, the Kazakhstan National Commission for UNESCO and ISESCO tallied up its work in 2012 and identified priorities for the current year at a meeting chaired by Head of the National Commission Imangali Tasmagambetov. Tasmagambetov named the international forum dedicated to the Decade of the Rapprochement of Cultures that will assemble U.N. and UNESCO leadership, prominent politicians, scientists and artists and the international forum in conjunction with the official launch of the world’s first comprehensive web portal of the Silk Road as centrepiece events which are to be this year’s priorities. 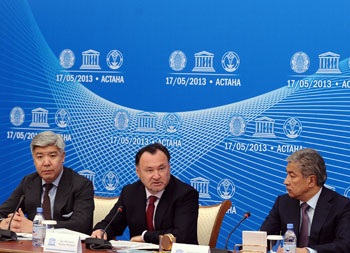 National UNESCO and ISESCO commissions focus on new challenges and goals to be achieved during 2013.

At the meeting, presentations were made by Permanent Representative of Kazakhstan to UNESCO Olzhas Suleimenov, Culture and Information Minister Mukhtar Kul-Muhammed, Environment Minister Nurlan Kapparov, Director of the UNESCO Cluster Office in Almaty Sergey Lazarev and others.

Permanent Representative Suleimenov congratulated everyone on the start of the decade of cultural rapprochement (2013-22) initiated by Kazakhstan and approved by the 67th session of the U.N. General Assembly.

One of the most significant events of Kazakhstan and UNESCO’s cooperation was the official visit of UNESCO Director General Irina Bokova to Kazakhstan. She took part in an expanded meeting of the National Commission, coinciding with the 20th anniversary of Kazakhstan’s membership in UNESCO, during which an agreement was signed between Kazakhstan’s government and UNESCO for the establishment of the Almaty regional glaciological centre under the auspices of the international organisation. Last year, Kazakhstan’s National Committee for Safeguarding Intangible Cultural Heritage (ICH) was established. Among the priority tasks of the committee are identifying and documenting the intangible cultural heritage of Kazakhstan.

Kazakhstan intends to join the multinational applications of Nauryz and falconry and Kyrgyzstan’s application for entering aitys and yurt on the UNESCO list. Kazakhstan’s own applications for the karazhorga national dance and orteke traditional puppetry have been sent to the organisation.

Honorary Director of the Margulan Institute of Archaeology Karl Baipakov said that in February 2013, papers for the cross-border nomination of “Monuments of the Silk Road: The initial segment and routes of the Tien Shan corridor” were presented to the World Heritage Centre. The nomination includes 22 monuments in China, three in Kyrgyzstan and eight in Kazakhstan, including Kiyalyk, Talgar and Karamengen in the Almaty region and Aktobe, Akyrtas, Kulan, Ornek and Kostobe in the Zhambyl region.

Chairman of the Committee for Science of the Ministry of Education and Science of Kazakhstan Nurlan Ybyrayym emphasised Kazakhstan’s participation in educational programmes and cooperation with UNESCO. He also mentioned the sensational discovery of two medieval treasures in Sairam in the South Kazakhstan region made by the Margulan Institute of Archaeology expedition.

Chairman of the Man and Biosphere National Committee Roman Yaschenko characterised the inclusion of the Korgalzhyn State Nature Reserve in the UNESCO Biosphere Reserve nomination as a landmark. Cross-border nomination of Western Tien Shan is under preparation and includes eight protected areas in Kazakhstan (Aksu-Zhabagly and Karatau reserves and three sections of Sairam-Ugam National Park) as well as areas in Kyrgyzstan and Uzbekistan. The Altai cross-border reserve is in the process of being created jointly with Russia.

The work of Kazakhstan’s National Federation of UNESCO Clubs was presented by its chairman, vice-minister of oil and gas Bulat Akchulakov.

An international UNESCO conference took place in 2012 to mark the 20th anniversary of the Almaty Declaration promoting independent and pluralistic media in Asia. The Fifth Conference of ISESCO Environment Ministers also took place last year and resulted in a decision to open an ISESCO Regional Office in Almaty.

UNESCO recommendations regarding the Haji Ahmed Yassavi mausoleum were also among topics covered at the meeting, and the hundredth anniversaries of the births of film producer and actor Shacken Aymanov and writer Ilyas Yesenberlin are on the list of the memorable dates to be marked on UNESCO’s 2014-2015 calendar.