ASTANA – On May 11, President Nazarbayev of Kazakhstan and President Gurbanguly Berdimuhamedov of Turkmenistan opened the Bolashak (Kazakhstan) – Serkhetyaka (Turkmenistan) railroad crossing which is set to become one of the key links in the growing framework of railways and road connections restoring the ancient Silk Road in the modern conditions. 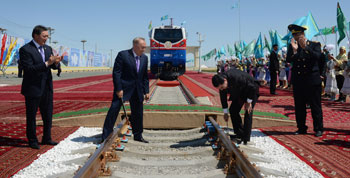 President Nursultan Nazarbayev (second from left) and Gurbanguly Berdimuhamedov (second from right) put the finishing touches at the Bolashak (Kazakhstan) – Serkhetyaka (Turkmenistan) railroad crossing on May 11, as Kazakh and Turkmen railways officials look on.

Upon arriving at the station, the heads of state saw a presentation on the railroad transit and transport potential of Kazakhstan and Turkmenistan. The two presidents also gave the go-ahead via an online link to a set of train cars with Kazakhstan grain from the Kostanay region to the Bolashak station. After the presentation, the two presidents talked with leaders of the railroad companies of Kazakhstan and Turkmenistan.

The presidents visited the station square, where they met with railway employees and local citizens. President Nazarbayev greeted the crowd and noted that Mangistau region is of particular importance for the country. The president said that the opening of the Kazakh-Turkmen section of the Uzen-Bereket-Gorgan railroad, which will cover territories spanning Kazakhstan, Turkmenistan and Iran, will allow Mangistau to become the region that provides passage to the Caspian Sea and the southern seas.

After that, the two heads of state conducted the ceremonial laying of the “Gold Roadbed” docking on the border of both states.

In his speech, President Nazarbayev said that the new transnational facility is of historical significance.

“It establishes a direct rail link between Kazakhstan and Turkmenistan. The new track is the shortest route for goods delivery and transit and, in the future, for commuters. Nowadays, time is a critical factor. In this regard, shortening turnover provides a significant competitive advantage. This advantage is reflected in business and, eventually, in increased prosperity for our countries. In addition, the Kazakhstan-Turkmenistan railroad is a key part of the future transit corridor with access to the Persian Gulf,” he said.

President Nazarbayev noted that the project was launched in 2007. “Then, we signed a declaration on the construction of the Uzen-Bereket-Gorgan main transport route with the presidents of Turkmenistan and Iran. In 2009, we started construction. Currently, the work of laying the Kazakh-Turkmen railroad has been completed successfully. In the future, we plan the creation of a route that will connect the transportation network of Central Asia, the Middle East and Europe. This idea was considered well before the signing of the declaration.” Nazarbayev stressed that over the past years, the relevance of the project has increased even more.

The president noted that the rail link between Kazakhstan and Turkmenistan opens new opportunities for enterprises, stimulating trade and economic growth. Extending the route will increase these opportunities. “First, we should expect an increase in the intensity of trade between our two countries. This, above all, relates to practical cooperation between the border areas of our two countries. Second, we will be able to increase exports in the direction of the Middle East and South and Southeast Asia. Third, a convenient and cost-effective route for dozens of countries in both the northern and southern directions will be created. We hope that our Iranian friends will complete their part of the route, and soon we will be celebrating the completion of the construction of the whole railroad to the Persian Gulf. We, in turn, will gain advantage as transit states, creating new jobs in logistics,” he said. 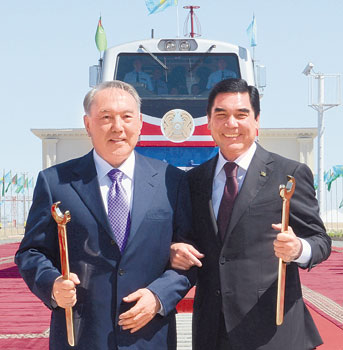 President Nursultan Nazarbayev and Gurbanguly Berdimuhamedov hold wrenches as they celebrate the completion of a new railway crossing on border between Kazakhstan and Turkmenistan.

The president also noted that the project is an indicator of the stability of the economies of the two countries.

In conclusion, President Nazarbayev thanked President Berdimuhamedov for his active support of the project. “I would like to express special thanks to all who worked on the project of the Kazakhstan-Turkmenistan railroad at all stages. Your creative work was embodied in the track connecting the countries. I want to wish the peoples of our countries well-being and prosperity,” he said. President Berdimuhamedov noted that the laying of the basis of new economic space uniting the countries of Central Asia and the Caspian Basin with the Black Sea region and the Caucasus states will ensure continued access to the Nordic countries.

“Our project implies a connection to the transport infrastructure in the east with further access to such economic centres of global development as China, India and the Asia-Pacific region. This means creating a larger-scaled format of cooperation in terms of geo-economics, as well as an innovative strategic vision of the development prospects of our countries,” the president of Turkmenistan said. President Berdimuhamedow thanked the construction workers, engineers, designers and all those who worked directly on the construction of the railroad.

“Implementation of such projects makes our countries economically strong, stable and confident in the future of our countries, which are connected by ties of genuine friendship, brotherhood and good neighbourliness. The decisive factor in the implementation of the project was the mutual support, teamwork and coordinated work of the relevant agencies of the two countries. Let me express my deep gratitude to the president of Kazakhstan for the support of this project and the mobilisation and allocation of all the resources necessary for its successful implementation,” the president of Turkmenistan said.

After moving to the Turkmen side, the two leaders attended the grand opening of Serkhetyaka station and the opening of the Bereket railroad junction via an internet connection. The Bolashak-Serhetyaka section is part of a future rail corridor that will connect Kazakhstan, Turkmenistan and Iran. Currently, the interstate project is in the final stage of implementation.

The overall length of the new railroad is 900 kilometres, the longest part of which, 700 kilometers, is located in Turkmenistan. The Kazakhstan part of the corridor – the Uzen-Bolashak section is 146 kilometres long and is a modern railroad line with developed infrastructure. Two new stations and five operation points have been opened along the track. Iran is yet to complete its section of the road.

The cost of construction amounted to 65 billion tenge, including 80 percent local content. After setting the track in operation, more than 800 people in Kazakhs will get jobs and housing as a result of the new track.