ASTANA – Kazakhstan’s equestrian team is hard at work preparing for the prestigious World Equestrian Games to be held in France in 2014. 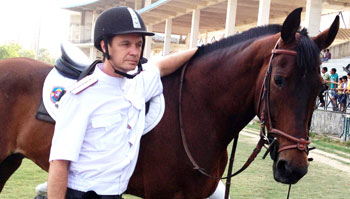 Horses of Adai breed are among the most treasured by Kazakhstan’s racers.

“It’s like the World Football Championship or the Olympics, for which people wait four years. It is extremely difficult to get into the World Equestrian Games for the participants and spectators as well. Even now, all tickets have already been sold in France. There were fifty thousand spectators in the dressage competitions in which I participated. People in France like equestrian sports no less than in Germany. More than one thousand horses take part in competitions in different disciplines!” said Sergey Buikevich, vice-president of the Equestrian Sport Federation of Kazakhstan.

Kazakhstan equestrians plan to participate in these competitions in the long distance and dressage categories.

Today, long distance races are the most popular discipline of equestrian sports and teams must submit applications demonstrating certain qualifications if they hope to participate in the World Equestrian Games. Long distance race teams include five athletes, six horses and about 20 support personnel such as veterinarians and assistants.

During those visits, Kazakhstan riders participated in equestrian festivals, including strong finishes in a 120-kilometre race. Three of Kazakhstan’s six athletes, Esenaman Koyshiev, Abish Etirekov and Sergey Buikevich, qualified for the World Equestrian Games. One hundred and thirty seven horses participated in these races and only 46 horses finished. Among teenagers and juniors Azat Koyshiev won an honourable 15th place in the 120-kilometre races. Total professional prize money at the event was more than $1 million. However, for the athletes, the most important aspect of the competition was to qualify for the World Equestrian Games.

The event provided an opportunity for the Kazakhstan team to use the Arab system of horse training, which is more appropriate than the previously used American system for horses in the Kazakhstan region. The Arab system has proven successful in the past with numerous Arab riders winning world championship long distance races.

The Kazakhstan team’s horses include exclusively local horses, particularly of the Adai breed. Whether or not Kazakhstan is able to win at the World Equestrian Games, participating will allow the country to showcase domestic horses and to establish their quality in major competitions. However, with proper preparation, Kazakhstan can win within the Commonwealth of Independent States and at a higher level.

After a success at the festival of equestrian sport in Abu Dhabi, the Kazakh team was invited to participate in other competitions at the 240 kilometre distance. Valuable competition and training experience was also gained as a result of the United Arab Emirates races.