ASTANA – A major German company is investing big in modular construction in Kazakhstan. On March 28, the KAZNEX INVEST Agency and the Chandler Modular company from Germany held a press briefing at KAZNEX offices on their new project. 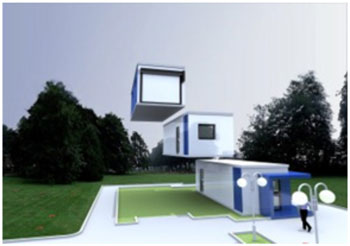 In 2012, the Chandler Group Company with the support of KAZNEX INVEST decided to build a factory in the Saryarka Special Economic Zone. The factory has been completed and is already manufacturing the modular units to construct medical centres specializing in obstetrics in the Karaganda region. They will be built as part of the 2013-15 three year state programme to expand the nation’s health infrastructure in rural areas.

The project will demonstrate the advantages of the modular construction method that is widely used in Europe. It is a cost-effective assembly of modular units. The modular construction of operating rooms helps maintain clean air standards of– only three motes per single cubic metre of air to prevent infection.

The new Karaganda medical centres will be built with modules made of materials that can retain their internal temperatures for three days, and that use far less energy. They may also be equipped with solar energy panels.

Eckart said that after the prototype project is completed, his company is prepared to start talks with the ministries of education and science, healthcare, and emergency situations on projects for them around the country.

Chandler executives believe demand for their units will be high in Kazakhstan. They say the Ministry of Emergency Situations plans to construct medical aid stations using modular units every 500 kilometres (300 miles) on major roads. Outpatient clinics in towns and new school buildings around the country will also be built with them. New slaughterhouses for the country’s rapidly expanding meat export industry will also be built with them.

However, Balgabay told the briefing there was still a serious barrier for the introduction of modular construction technology in the country.

“The new product should be integrated in local legislation,” he said. “The main task of KAZNEX INVEST is to support the project and revise construction standards that haveexisted since the Soviet era. They still do not allow us to use modular construction to its full extent.

The Chandler Group is based in Hamburg and has operations in Russia, Belgium, the United States, Ukraine, Belarus and Central Asia. The company offers its customers a variety of modern, fire-safety building materials and technologies for metal and wooden structures, vinyl windows and up-to-date climate control and ventilation systems. The company transports its modules to any destination around the world using all types of transportation: sea, road, rail and air. The system permits the design of new buildings of any shape and size using standard, uniform units. Buildings constructed with Chandler’s modular technology are constructed in accordance with accepted international quality and safety standards with a warranty period of at least 30 years.

Most utilities, such as ventilation, air conditioning, heating, lighting, sockets and sanitary equipment can be installed at the plant. Usually, the modular units do not require a strong foundation.

Modules are structures consisting of a metal frame and enclosing elements. The metal is galvanized to prevent corrosion. The frame has vertical, load-bearing pillars and horizontal beams for the installation of windows and doors. Walls can be made ofcorrugated metal sheet, sandwich panels, or other materials.

Modular buildings can function either as offices or living spaces.

Originally, modular buildings and block-modules were used as huts in inaccessible areas. Today, they can be found at major hospitals and educational establishments around the world.