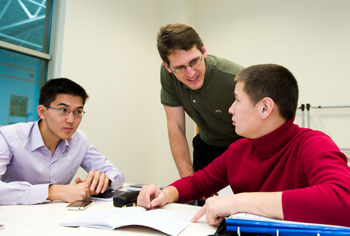 Simplified entry to the EU will allow Kazakhstan’s students to implement their knowledge in exchange for the best international experience.

Annually, more than 200,000 students and academics from non-EU countries come to the EU to study. However, the procedure for the enrolment of foreign students in EU territory is not unified.

In order for the EU to remain attractive to talented youth and academics from other countries and not fall behind the U.S. and Australia in this respect, the European Commission wants to reduce the entry rules for students and scholars to a common denominator. In particular, the Commission considers it necessary to introduce a 60-day deadline for a decision regarding issuing student visas to students from third countries.

It is proposed to replace the two existing EU regulations on students and researchers with one new regulation, changing the number of rules governing the process.

Currently, each EU country has its own rules about how foreigners can access its universities, and transitions from one university to another are complicated. In the future, it is planned for visa applications, regardless of country, to be ruled upon within 60 days. It is also planned to facilitate transition rules from one institution to another across the EU territory, so foreign students can more easily change from, for example, a Swedish university to a German one.

Liberalisation shall also cover students’ side jobs. There are plans to provide foreign students and researchers with the right to work for at least 20 hours a week, so that they can independently support themselves and contribute to the economic development of EU member states. From the point of view of the European Commission, foreign interns, students and au-pair programme participants will also benefit from the planned measures because the European Commission’s proposals provide additional protection to them. Currently, they do not fall within the scope of the European legislation.

The new proposals suggest that opportunities for foreign students and researchers to move within the EU during education and research will be simplified. Ulrich Grotus from the German Academic Exchange Service shares the position of the European Commission on increasing the attractiveness of Europe for students from third countries. He also encourages remembering other pressing issues. “In Germany, demand for English-language master’s programmes is greater than their offering,” he says. It is in this direction, in his opinion, that improvements are needed.

Sandra Gazeloff, head of one of the units of the Alexander von Humboldt Foundation engaged in scientific cooperation programmes, welcomes the EU’s intentions. She expressed the hope that the mobility of young scientists involved in graduate programmes at various universities will increase. New proposals also involve allowing students and young scientists from third countries to stay in the EU for a year after completing their term of study to find a job or establish a business.

The proposals will be forwarded for coordination to the European Parliament and the EU Council.

In November 2012, the commission approved a Communiqué for the European Parliament and the EU Council on these issues. The document discusses how visa support can contribute to economic growth in Europe.

The European Commission press service noted that in 2011, foreign citizens spent 330.44 billion euros within the EU and that the total number of Europeans in the tourism sphere in 2011 was 18.8 million people. According to the latest estimates, by 2020 the number of people employed in the tourism sector will increase to 20.4 million and foreigners in Europe will spend 427.31 billion euros.

The communiqué noted permanent growth of the number of visas issued to citizens of third countries; however, it stressed the need for more effective application of the existing rules in the sphere of visa issuance.

Overall, according to data from the European Commission, 12,638,750 visas were issued in 2011. Leading among visa-seekers are Russia, Ukraine and China.

Proposed changes will also affect students from Kazakhstan, including many who study in EU countries under the Bolashak programme. Many Kazakhs study in Manchester University, City University London, as well as in Glasgow and Dundee, which are also among the more popular ones. The list of higher educational institutions recommended by the Bolashak programme includes more than 100 universities from 33 countries. From 2010 up to date, the Bolashak programme provided 3,194 students with scholarships, 46 per cent of them study in the UK and approximately two per cent in the rest of Europe.

Another scholarship programme, which becomes more popular among the Kazakhstan students, is Erasmus Mundus. Erasmus Mundus is a cooperation and mobility programme in the field of higher education that aims to enhance the quality of European higher education and to promote dialogue and understanding between people and cultures through cooperation with non-EU countries. In addition, it contributes to the development of human resources and the international cooperation capacity of tigher education institutions in third countries by increasing mobility between the European Union and these countries. This year, according to the scholarship statistics, about 200 students from Kazakhstan study in EU for Masters and PhD programmes.

The European Commission noted that proper use of existing visa rules will maintain Europe’s attractiveness to foreign tourists and promote economic growth.

“Taking into account the current economic decrease, we need to fight for the increase of tourist flows to Europe [while] simultaneously providing our cross-border security,” EU Commissioner for Internal Affairs Cecilia Malmstrom noted on the issue.

Thus, according to the Commission, consulates shall provide that interviews be appointed no later than in 15 days after application and decisions on visa issuance shall not exceed a 15-day term. In addition, the Commission considers it important to make available forms for receipt of visas in languages of those countries where the consulates operate, as well as consider the possibility of issuing multiple visas.

In addition, in the long term, the Commission considers it possible to change the rules for visa issuance, including reducing terms for the procedure of consideration, simplifying application forms, specifying the rules for issuing multiple visas and harmonising visa practices in Schengen area member states.