By Yelena Kuznetsova in Culture on 10 April 2013

ASTANA – The soloists of the Kulyash Baiseitova National Opera and Ballet Theatre continue on promoting the capital of Kazakhstan abroad with their new victories. 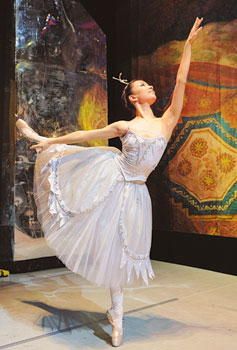 Ballet fascinates spectators with its flawless and tender movements.

One soloist, Balkiya Zhanburchinova, brought back the gold medal of “Dance Olympus” competition festival in Germany. Zhanburchinova came to the theater at the beginning of the season after a one-year internship with her partner Serik Nakyspekov in the Academy of Russian Ballet named after A. Vaganova in St. Petersburg.

This year was very busy and intense for the country’s dancers: they have attended the school, mastering the intricacies and nuances of Vaganova academic style, worked with great masters of ballet Konstantin Zaklinsky, Igor Zelensky, Sergei Vikharev, Spanish choreographer Nacho Duato. Artistic director of the Academy Altynai Asylmuratova organized presentation of young Kazakh artists on the stage of the Leonid Yakobson Theater, where they performed leading roles in “The Nutcracker”.

Recently, Aigerim Beketayeva and Takhir Gatauov also demonstrated the successful performance at the gala concert “Young Stars of the World Ballet” in Germany. In the summer, Aigerim Beketayeva won bronze in a competition in Bulgarian city of Varna and now she has achieved a new goal.

Sixty dancers from 17 countries took part in the International Ballet Competition named after Rudolf Nureyev in the Hungarian capital Budapest. It was created in 1992, during the life of the great dancer, by his friend Roland Bokor. The jury was presented by stars of the world ballet such as Charles Jude, Irek Mukhamedov, Jae Park Kuen, Lyudmila Semenyaka, Mary Aradi, who danced with Nureyev, Evelyn Terry, and George Szakaly.

In the first and third rounds Kazakh performers danced classics including the pas de deux from “Sleeping Beauty” and “Don Quixote”, and in the second round they demonstrated modern choreography. Professionals and spectators liked the performance of Aigerim Beketayeva and Takhir Gatauov to the music of Hungarian composer Gyorgy Ligeti “Fear of Mood” staged for them by Kazakhstan’s Honored Art Worker Galia Buribayeva, and they made a decision to dance it in the final gala concert.

Interestingly, the soloists of the Baiseitova Theater for the first time presented within this competition Kazakhstan’s new capital, which, due to the success of the ballet dancers becomes recognized in the world of culture. Thus Jea Park Kuen, delighted by the performance of Kazakh artists in the gala concert dedicated to the 20th anniversary of diplomatic relations between Kazakhstan and Korea, invited Beketayeva and Gatauov to take part straight in the second round of the Seoul competition which is a great credit.

The grand opening is scheduled for April 19. At the opening, which to be held in Opera and Ballet Theater named after Kulyash Baiseitova, Aigerim Beketayeva will perform the leading role of Odette-Odile in “Swan Lake”.