In 2012 UN team marked its 20 years anniversary of presence in Kazakhstan. The first UN office was opened in Almaty back in 1993, right after the conclusion of an agreement between President Nazarbayev and then Secretary-General of the United Nations Boutros Boutros-Ghali on 5 October 1992. 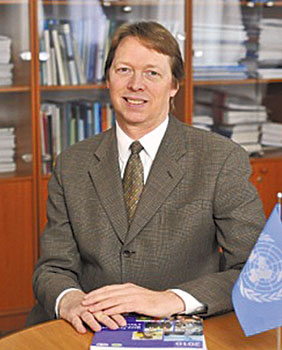 Over the course of these 20 years the UN has been partnering with the Government and people of Kazakhstan to help the country achieve sustainable and inclusive development.

Starting with serving the country’s immediate humanitarian and political needs, the UN’s work then evolved to focus on development assistance using international expertise. Among the early initiatives, for example, was the provision of humanitarian aid to flood victims in the Caspian Sea region in the spring of 1993.

The UNICEF Vaccination campaign, commenced in 1993, played an important role in the development of cooperation between the new independent state and the United Nations. Supported by the Ministry of Healthcare, the vaccination programme achieved tremendous success in reducing the incidence of various childhood diseases. Around the same time, UNDP UNICEF and UNESCO started working in the environmental disaster area of the Aral Sea region, helping to address the pressing problems of rising poverty, ineffective water resources management and health deterioration.

Over the past 20 years, the UN Agencies have supported the drafting of a wide number of strategies, programmes and legislation dealing with social issues, improvement of health and education, environmental management, macro-economic reform, human rights, migration and others. The UN Agencies also carried out pilot projects at the local level.

Working within the United Nations System, every agency has its own area of expertise, focus and mandate. As of today there are 18 UN agencies, programmes and funds working in Kazakhstan with offices in Astana and Almaty.

Work of agencies, programmes and funds at the country level is guided by the United Nations Development Assistance Framework (UNDAF). UNDAF is a strategic programme document that describes the collective response of the UN system to national development priorities and needs within the framework of the Millennium Development Goals (MDGs) and other international development commitments. It is based on five inter-related programming principles: human rights based approach; gender equality; environmental sustainability; results based management and capacity development.

The overall goal of the UNDAF 2010-2015 is to assist Kazakhstan in achieving its national competitiveness agenda with a focus on human development for all. The programme covers 3 strategic areas of cooperation:

Economic and Social Well-Being for All, with particular attention to vulnerable groups, including women, children, migrants, refugees, youth and aged people, and people with disabilities.

Environmental Sustainability, focused on improved and enhanced Government capacities for integrated natural resources management, including the adaptation to and mitigation of climate change, as well as an increase in the capacity of the Government and communities to deal with natural disasters and other emergency situations.

Since the Millennium Summit, the work of the United Nations Agencies has been guided by a set of goals derived from the Millennium Declaration, signed by world leaders in New York in September 2000 including President Nazarbayev. Called Millennium Development Goals (MDGs), they set well-defined and measurable targets for states to achieve by the year 2015 to improve the lives of millions of people. MDGs cover such crucial development areas as poverty reduction, improvement of child and maternal health, gender equality, combating major diseases, enhanced access to primary education and environmental sustainability.

Kazakhstan already achieved some of the MDGs, including on poverty reduction, access to primary education and promotion of women’s rights, and the Government has made further commitments under the MDG+ agenda. These comprise expanded targets for those MDGs that have already been achieved in Kazakhstan. Our joint work with the Government on MDGs has led to notable progress in the area of child and maternal health by means of introduction of effective technologies (such as effective perinatal care, integrated management of childhood illnesses, and prevention of mother to child transmission of HIV).

The United Nations has solid experience in identifying and addressing the challenges vulnerable groups face and in institutional and human capacity development in Kazakhstan. This includes, in particular, translation of policy into delivery of integrated quality education, health, nutrition, water/sanitation and social protection services, including at the district, community and family levels for vulnerable groups, particularly in rural areas. One of the models employed in that domain is joint programming, through which the UN organizations and national partners work together to develop, implement, monitor and evaluate the activities aimed at reaching the national goals in a more coherent, effective and efficientway.

One of the examples where that model proved to be successful is the joint programme in Semipalatinsk region. Semipalatinsk region turned out to be the best exemplar, where UN organizations and national partners joined their efforts and addressed the complex issues of the region in order to improve child and maternal health and social services, support young people, promote local development and citizen participation.

The international community, represented by the UN General Assembly, recognised the Semipalatinsk Testing Site (STS) as the cause of all negative after-effects for the human lives and health and environment in the region, and made several commitments to render assistance for Kazakhstan to rehabilitate the environmental, social economic, and humanitarian sector in the region affected by nuclear testing at the Semipalatinsk site. On 16 December 1997, the 52nd session of the UN General Assembly adopted the Resolution entitled ‘International Cooperation and Coordination of Efforts to Rehabilitate the Population, Environment and Economic Development of Semipalatinsk Region in Kazakhstan’. The Resolution was the starting point for various efforts of the international community, donors, and the Government to resolve the problems of Semipalatinsk Region. The UN Secretary’s General Report to the 53rd session of the UN General Assembly identifies four priority areas for international assistance to Semipalatinsk Region including (a) environment; (b) health; (c) economic rehabilitation; (d) support to humanitarian development. These priorities were identified following the recommendations of experts.

Since then, the General Assembly accepted six resolutions between 1997 and 2009, urging the international community to assist the Government and the people of Kazakhstan in their efforts to rehabilitate the Semipalatinsk nuclear testing site and the surrounding affected areas. The day of August 29 was proclaimed as the “International Day against Nuclear Tests” by a General Assembly Resolution adopted at its 64th session in December 2009. The 6th resolution on Semipalatinsk (A/RES/63/279) adopted in April 2009, invites the international community and the Government of Kazakhstan to shift from humanitarian assistance to a more comprehensive development-oriented approach that addresses the medium- and long-term problems of the Semipalatinsk Region.

The Tokyo International Conference on Semipalatinsk arranged by the Japanese Government and the UN Development Programme in 1999 has become the entrypoint for the international assistance rendered between 1999 and 2010 to the regions suffered from the nuclear tests at STS in the years of the Cold War. The Conference resulted in the recognition of the necessity to rehabilitate the region by the donors, and agreement on joint actions to resolve the various problems of which the community still experience.

Six Resolutions of the UN General Assembly and Reports of the UN Secretary-General on Semipalatinsk identifying the multi-sector nature of the issues of the region affected by nuclear tests have played a key role for international assistance. The UN Development Programme led the international community policy implementation in the process of assistance to the region and became the key driver of the donors’ efforts, having established the International Trust Foundation for assistance to Semipalatinsk Region.

International assistance provided between 1999 and 2010 by various donors in the four key aspects, covered different problems of the region, comprising environment, health and social care, economic rehabilitation and humanitarian development.

Launched in 2008, the UN joint programme in Semey region promoted local development, and was aimed at reduction of unemployment, poverty, and social exclusion. Under the programme more than 150 rural households benefitted from rural microcredit services, local entrepreneurs gained better access to financial markets, over 5,000 vulnerable families received social counselling and family support services, and up to 50% of women and new-born babies received quality health care services.

As the Secretary-General’s latest report indicates, strengthening of coordination among international donors and the Government could bring to greater achievements in this region. All partners should share a new vision for development of Semey areas that addresses not only humanitarian problems, but pursues longer-term development-oriented approach to environmental sustainability, economic development and social welfare. Semey should shift from being just a nuclear test ground to the place of prosperous growth as hoped by its people.

Three years later the programme was expanded to a wider UN-Government joint programme in East Kazakhstan, using Semey programme as an example. A new UN joint programme for 2011-2015, “Raising competitiveness of the region through innovative approaches to regional planning and social services”, is jointly funded by the Government of Kazakhstan and the United Nations. It builds on the success of a previous inter-agency programme and is aimed at accelerating the progress on human development indicators and supporting sustainable development of the East Kazakhstan region. The Joint programme consists of five components covering social and economic development and health-related issues. The programme addresses in particular the needs of vulnerable people in the cities of Semey, Kurchatov and Ust-Kamenogorsk, as well as fourteen other affected areas of East Kazakhstan Oblast.

Much has been done in the past years. Today, we see that the region has an impressive array of projects and research on radiology and ecology, better healthcare infrastructure, dedicated social support, a growing business community, more active civil society organisations that contribute to the discussion about remaining challenges.

While taking stock of these results and reflecting on the past experience, an important lesson has been learned: the investments made in human development need to be upscaled and supported in the upcoming years, to maintain a stable pattern of development and growth.

We need to focus on long-term development; this should be our new vision, guiding our efforts in the near future. To achieve this objective, we need a strong partnership between the Government, the UN and all development partners.

Strategic relationships of the United Nations with the Government of Kazakhstan are very firm and unique. We in the UN Country Team feel that our agencies are appreciated as a trusted partner by the authorities and people, and we strive to be a provider of high-quality advice, a supporter with flexible and efficient response mechanisms, and a model of accountability.

Many of the initiatives implemented together with the Government of Kazakhstan have proved successful, and set a leadership tone for other member states. Due to successful partnership with government agencies – central or regional – we are able to implement wide assistance programmes aimed at improving the quality of lives of people of Kazakhstan.

We will keep nurturing our partnership. Kazakhstan is unique in the sense that despite the fact it is young and ambitious it has the wisdom to pursue a multilateral approach in its foreign policy and find the right balance between promoting the national interests and strengthening cooperation with other member-states.

While the general wealth of Kazakhstan has increased and poverty has declined, inequality becomes an increasingly important challenge. The growing disparity among the regions, and between rural and urban dwellers, needs to be addressed. The revival of rural communities and agricultural regions needs to be at the centre of job-creation and social programmes. Also, access to clean water, sound sanitation facilities, and top-quality health, education and social services needs to be universal.

The future of the UN-Kazakhstan’s partnership will be guided by the country’s development goals outlined by the President of Kazakhstan in the 2050 strategy. The most relevant directions will include supporting country’s economic, social and political modernization for inclusive sustainable development and promoting Kazakhstan’s initiatives in multilateral cooperation and regional integration.

The author is UN Resident Coordinator in the Republic of Kazakhstan.