By Lyubov Dobrota in Business on 6 February 2013

SHYMKENT – By the end of this year, the capacity of the Ordabasy Kus LLP poultry farm to produce and process turkey meat will double. JSC KazAgro approved funding to expand the complex and 1.355 billion tenge was allocated through KazAgroFinance for the acquisition of equipment for ten new poultry houses. The Israeli company M.A.D., which successfully completed this type of work in the first phase of the project, is involved in the delivery and installation of the equipment. 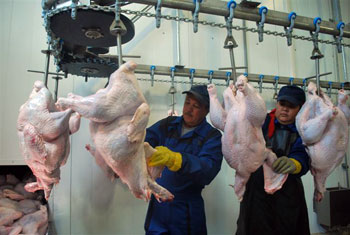 Workers prepare turkey meat for shipping out to customers at the Ordabasy Kus factory in south Kazakhstan.

“Ten additional poultry houses will allow us to double the number of poultry stock and, consequently, double the amount of our product,” says Marat Togayev, head of Ordabasy Kus, LLP. “The capacity of the slaughter and feed shops of our processing complex was originally designed for ten thousand tons of output; therefore, we do not need to expand them. Moreover, at the initial stage of construction, we laid the necessary engineering infrastructure for future expansion. So now the construction is less expensive.”

The creation of the first such complex in the country, worth 3.294 billion tenge, has already provided approximately 330 people with jobs.

This modern enterprise is a closed production cycle, which includes breeding, production of feed and deep processing of meat. The management of the partnership began construction using their own funds, but the state programme of Accelerated Industrial-Innovative Development helped accelerate the process and with additional funding the farm reached its full capacity in a short time frame.

Last year, Ordabasy Kus LLP shipped 4,884 tons of its turkey meat and products. This is almost twice as much as in 2011. The demand for turkey meat is growing, despite the fact that turkey is a delicacy in Kazakhstan: the average production per capita is only about 250 grams. In contrast, for example, in the United States consumption of turkey meat reaches 15 kg per person; in Israel, 13.5 kg; in Europe, 11.7; in Russia, about one kg.

One third of the partnership’s products are successfully sold to Russian markets. The network of potential exports is constantly expanding: in addition to Moscow, St. Petersburg, Tambov and Chelyabinsk, negotiations are underway to export poultry to Uzbekistan and Afghanistan, though the company’s priority is still to saturate the domestic market.

Today, there are more than 30 kinds of products in Ordabasy Kus’s range, including breast fillets, rolls, sausages, pates and preserves, which come to consumers under the brand Damdi Et (“delicious meat,” in Kazakh).

By the end of this year, the company plans to complete the implementation of the second stage. The third stage of the project, scheduled for 2014, involves increasing capacity by two tons. However, even this is not the final step in the development of the company. The creation of its own brood stock and production of hatching eggs, which are currently still being imported from Canada, is ahead. By then, it would mean that Kazakhstan has established its first centre for the turkey industry.

The company seems to be on the right path, as demonstrated by sustained consumer demand and numerous awards from prestigious exhibitions and fairs. Oradabasy Kus won in the Food Products category of the Best Product of Kazakhstan 2012 exhibition and received the European Quality certificate from the European Summit of Entrepreneurs.