By Assem Kazybay in International on 20 February 2013

In a sign of growing friendship and expanding strategic partnership, President Nursultan Nazarbayev paid a working visit to Spain on Feb. 5-6 for meetings with King Juan Carlos I, Prime Minister Mariano Rajoy and chief executives of major Spanish companies working in Kazakhstan, including Patentes Talgo S.A., Airbus Military and others. 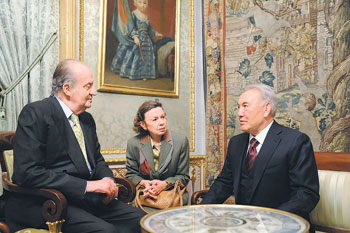 During his visit to Spain President Nazarbayev met King Juan Carlos I to discuss issues of bilateral cooperation and also awarded him Kazakhstan’s highest award, the Order of Altyn Kyran.

President Nazarbayev arrived in Madrid on Feb. 5 and on Feb. 6 he met King Juan Carlos I to discuss cooperation on tourism, culture, international issues and humanitarian affairs.

Spain is a major partner of Kazakhstan. It is the second European country with which Kazakhstan has signed a treaty of strategic partnership. Spain is also the first EU member state to sign a full package of agreements with Kazakhstan on criminal law.

“This visit is a reflection of the very wide-ranging and expanding bilateral ties between Astana and Madrid which are mutually beneficial and reach into trade, military equipment, transportation and culture,” Assylbek Mendygaliyev, a leading research fellow at the Nazarbayev Center’s Institute for Statehood, Issues of Security and Development, said. “The relations have always benefited from the very close personal friendship between the President of Kazakhstan and King Juan Carlos I.”

With Carlos Palacio Oriol, the president of Palentes Talgo S.A., President Nazarbayev discussed further cooperation in the manufacturing and technical maintenance of railway equipment and passenger rail cars. Nazarbayev said a joint venture between Patentes Talgo S.A. and Kazakhstan’s national railway company Kazakhstan Temir Zholy has already built around 70 passenger rail cars and in the near future the production is set to rise to 150 units. He then noted that there were great opportunities in that area.

“Now our challenge is to build high-speed railway between Astana and Almaty, and I think we will continue to work in this field,” he said.

Oriol said his company had worked with its Kazakh partners for 10 years with successful results.

“We are pleased that the president of Kazakhstan has a clear vision for the development of the railway sector and, above all, for high-speed railway transport. Cooperation with Kazakhstan is important for us, and we will do everything to continue its development for the benefit of the both sides,” Oriol said.

Earlier, in January 2013, Kazakhstan has taken delivery of the first two C295 transport aircraft from Airbus Military that it ordered last year, marking the company’s entry into the CIS regional market. The aircraft, the first two on firm contract and a further six on options to be progressively confirmed in the coming years, were formally handed over in Seville before the ferry flights, via Astana, to Almaty, where they will be based.

In a meeting in Madrid, Nazarbayev said Kazakhstan was carrying out several joint projects with Airbus Military and said their ties should be expanded.

Urena-Raso said the company’s prospects in Kazakhstan were sound thanks to the good relations between the governments of the two countries. Airbus Military would participate in the further development of the country’s aviation industry, he added.

Following the talks, a memorandum of understanding for further cooperation was signed between Kazakhstan Engineering and Airbus Military.

President Nazarbayev also met the heads of the Maxam, OHL and Next Limit Technologies companies and discussed future cooperation with them.

They discussed cooperation in manufacturing explosives for use in the construction and mining industries and on future infrastructure construction projects, including ports, airports, roads and railways. They also explored jointly developing software for computer simulations in scientific and engineering research.

The Maxam Company consists of over 140 enterprises with production capacities in 40 countries. Since 2002, it has been engaged in ore mining in Kazakhstan where it employs 181 people.

The OHL Company specializes in designing and building infrastructure facilities. The company has built facilities in 39 countries and is currently constructing new ones in 30 nations.

Next Limit Technologies is famous for the quality and capacity of its computer simulation software.

Overall, there about 30 small and medium-sized Kazakh-Spanish joint enterprises working in Kazakhstan.