By Assem Kazybay in International on 20 February 2013

Pope Benedict XVI welcomed the efforts of President Nursultan Nazarbayev to promote inter-religious and inter-cultural understanding on Feb. 6 and gave his apostolic blessing to Kazakhstan’s initiatives in this field. 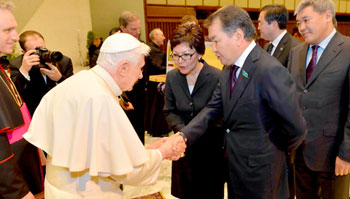 Meeting Pope Benedict XVI, Mami expressed gratitude to the Pope and the Holy See for all-round support for the Congress, and conveyed cordial greetings from the President of Kazakhstan.

The Pope praised the efforts of President Nazarbayev in preserving inter-confessional and intercultural understanding and accord, and wished success in the development of a multicultural dialogue and strengthening the peace. Pope Benedict XVI also gave apostolic blessing to Kazakhstan’s initiatives in the area.

During his visit Mami also met Dean of the College of Cardinals of the Holy See Angelo Sodano, President of the Pontifical Council for Interreligious Dialogue Jean-Louis Tauran, Secretary for Relations with States in the Roman Curia Dominique Francois Joseph Mamberti.

“The Vatican is an important political partner for Kazakhstan. We have recently celebrated the 20th anniversary of our diplomatic relations, 20 years of constructive and sustained interaction based on mutual respect and full confidence,” Mami stated at the meeting with Cardinal Jean-Louis Tauran.

He stressed that President Nazarbayev’s official visit to the Vatican in November 2009 gave a strong impetus to the development of bilateral relations. It was during that visit that Pope Benedict XVI assured President Nazarbayev of the Vatican’s full support for Kazakhstan’s chairmanship in the OSCE and for the idea of organizing an OSCE Summit in Astana.

The relations between Kazakhstan and the Vatican have always been strong and warm. President Nazarbayev first visited the Vatican in 1994 and in September 2001, a few days after the terrorist attacks of September 11 in the United States, Pope John Paul II visited Astana. That visit was seen as an affirmation of traditions of tolerance prevailing in Kazakhstan and of the importance of continued efforts to strengthen dialogue and understanding among various religions and civilizations at a time when terrorists were trying to hijack religion and drive a wedge between countries and peoples. During that visit, Pope John Paul II called Kazakhstan “an example of a country where men and women of different origin and belief live in peace with each other.”

At the meetings in the Vatican, Mami and his counterparts exchanged views on the topical issues of cooperation between Kazakhstan and the Vatican and discussed activities of the Congress of World and Traditional Religions.

“I am happy that the congress is held regularly. This initiative of the President of Kazakhstan is alive and growing, and no one questions now the existence and future of the Congress,” Cardinal Jean-Louis Tauran said.

He also noted the high importance and uniqueness of the existing understanding between different religions in Kazakhstan.

Also, during the visit, a roundtable on interreligious dialogue and a photo exhibition dedicated to the 10th anniversary of the Congress were held. Speaking at the opening ceremony of an exhibition, the Senate Speaker said the forum proved its effectiveness and has become a useful platform for promotion of the global dialogue for the last ten years.

“By a twist of fate Kazakhstan became the second home for thousands of Catholics. Today, 79 Catholic communities operate in the country,” Mami said.

“There were about 1.5 billion Catholics in the world according to 2010 data. More than 100,000 Catholics live in Kazakhstan. In this connection, strengthening of cooperation with the Vatican is strategically important for Kazakhstan,” Shokan Orazbekov, a senior research fellow for geopolitics and international relations at the Institute of Statehood, Issues of Security and Development of the Nazarbayev Center, said commenting on the visit.

The Congress of Leaders of World and Traditional Religions has become one of the largest international regular international gatherings. Senior representatives of the Vatican and of dozens of major religions from throughout the world participated in all Congresses held in Astana in 2003, 2006, 2009, and 2012.

“The growing interest of the international community in the Congress of Leaders of World and Traditional Religions is evidence that this international initiative of the President of Kazakhstan has become an integral part of a global process for the establishment of inter-civilizational and inter-religious dialogue, which is especially critical in the current turbulent times. For ten years, the Roman Catholic Church has supported this initiative aimed at promoting inter-religious dialogue in the world. Promoting tolerance and intercultural dialogue is considered as a key priority in cooperation between Kazakhstan and the Vatican,” Nazym Malibayeva, a senior research fellow for religious studies at the Nazarbayev Center’s Institute of Statehood, Security and Development Issues, added.

“Friendship and confidence are built step by step together. This visit to the Vatican of the Chairman of the Senate of the Parliament of the Republic of Kazakhstan and Head of the Secretariat of the Congress of the Leaders of World and Traditional Religions, Kairat Mami, represents one of these important steps,” Archbishop Miguel Maury Buendia, the Apostolic Nuncio in Kazakhstan, told the Astana Times.

He noted: “The friendship and confidence that happily exist between Kazakhstan and the Vatican, head of more than one billion Catholics, is not only a model for international relations but a significant point of reference in how to promote religious understanding in today’s world. The Vatican has always appreciated the harmony that characterizes the daily life of the different religious communities in Kazakhstan and has supported from the beginning President Nazarbayev’s initiative of convening the congress of religious leaders, which is transforming Astana into a world religious strategic centre.”