By Maryam Turezhanova in Business on 20 February 2013

ASTANA – Russia, China and the European Union have signed new agreements with Kazakhstan giving the go-ahead to complete the Western Europe-Western China international transport corridor by 2015. 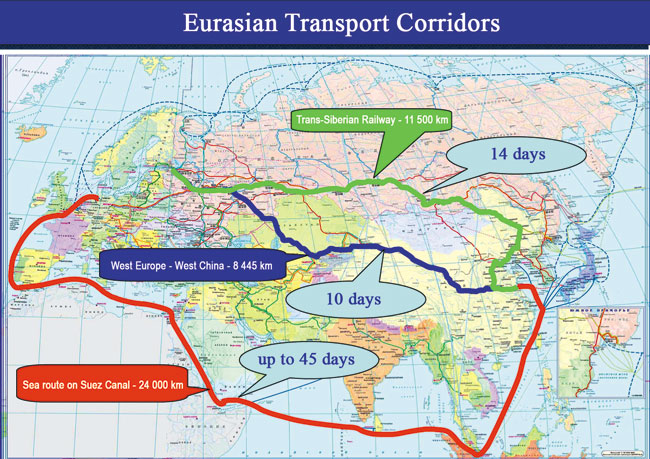 The new transportation corridor is the largest project of its kind ever undertaken in the history of Central Asia.

Some 2,452 kilometres (1,523.6 miles) of the new roads will be constructed in Kazakhstan. That programme will cost 825.1 billion tenge ($5.47 billion) and involve 1,390 kilometres (863.7 miles) of the Kyzylorda – Turkestan – Shymkent – Taraz – Almaty – Khorgos highway to Category I standards with four-lane highways and 1,062 kilometres (659.9 miles) of the route from the Russian border through Martuk, Aktobe, Karabutak, and Kyzylorda) to Category II standards. Conditions for turns, visibility and angles on inclines and descents will be substantially improved.

The corridor will dramatically cut transportation timetables and costs compared with maritime traffic through the Suez Canal and will also cut shipment times compared with the Trans-Siberian Railway. Current average transportation time by sea is 45 days and along the Trans-Siberian Railroad it is 14 days, compared to only 10 days along the new Western Europe – Western China corridor.

The project will create three major transportations routes: China – Kazakhstan, China – Central Asia, and China – Kazakhstan – Russia – Western Europe. By 2020, the volume of freight traffic passing through Kazakhstan is expected to increase by 250 percent compared with today and the value of the total savings from the reduction of travel time thanks to the new corridor will be 33.9 billion tenge ($220 million) per year. The cities and regions of Aktobe, Kyzylorda, South Kazakhstan, Zhambyl and Almaty will directly benefit from their positions along the corridor. It will generate a vast boost for small and medium-sized enterprises (SMEs), service industries, tourism and other sectors of the economy.

“In 2012, 800 kilometres (480 miles) of the Western Europe-Western China international corridor were opened for traffic and another 700 kilometres (420 miles) has been commissioned,” said Minister of Transport and Communications Askar Zhumagaliyev.

The work involved 21 general contractor organizations, 66 subcontractors, 4,500 major machines, 34 asphalt laying machines, 32 cement mixers, 37 crushing plants and over 35,000 workers. This year, another 806 kilometres (500.8 miles) of the corridor will be upgraded and opened for traffic.