Kazakhstan to Launch New Generation Green Smart Mine in 2015

ASTANA – In keeping with the global trend for saving energy and resources, the Kazatomprom National Atomic Company (Kazatomprom) announced the development of a smart uranium mine project at the fifth seminar dedicated to the development of Kazakhstan’s uranium and atomic industries held on January 31 in Almaty. 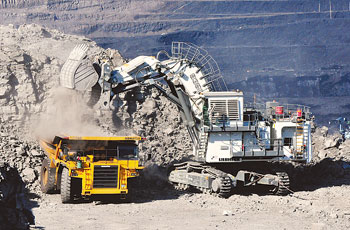 The “smart” mine will implement advanced technologies aimed at energy savings, environmental and production efficiency.

The implementation of the project will contribute to positioning of Kazakhstan as a country committed to a new, green development strategy. The main goal of the project is testing and introducing new technologies in uranium mining to bring down costs.

The meeting was organised by the Institute of High Technologies LLP (IHT), a subsidiary of Kazatomprom NAC, and focused on the development of the concept of a new generation green smart mine.

The event brought together experts from Kazatomprom; its subsidiaries, joint ventures and affiliated companies; representatives of foreign companies currently working or planning to work with the national atomic company in the field of innovation as well as leading technicians and professionals involved in introducing new technologies.

Experts discussed innovations in the atomic and uranium industries including related industries such as metallurgy of non-ferrous, rare and precious metals; geology, geophysics and geo-technology in the uranium industry; processing uranium and associated valuable components; scientific and technological issues of intensification and optimisation of production and deep processing of uranium deposits to produce competitive products with high marketability; the production and processing of rare earth elements from mineral and industrial sources; the production of technological, analytical and laboratory equipment; advanced mining technologies and issues surrounding the development and use of renewable energy for the nuclear industry in Kazakhstan.

Among the issues discussed were also opportunities and prospects for the innovative development of radio ecology, environmental protection, uranium production safety and training qualified personnel for the uranium mining and atomic industries of Kazakhstan.

Experts believe this experimental mine will become a prototype for a new generation uranium mine, which will provide for more environmentally safe and at the same time more cost-effective exploitation of uranium deposits. Advanced technical solutions tested at the smart mine will be introduced at the uranium mining companies of Kazatomprom, including its joint ventures, as holders of the intellectual property rights.

“Kazatomprom has started developing a new smart mine. We will invite our leading foreign partners to participate in the development of the concept. The mine will allow us to reduce technogenic impact at sites where uranium deposits are being developed, to increase their complexity of processing, to reduce the cost of energy significantly and to develop solar energy,” Director General of IHT Serik Kozhakhmetov said at the meeting.

National companies are actively developing ways and mechanisms to ensure their development, inflict minimal harm on the environment and maximize efficiency. In order to achieve these goals, modern “smart” technology is needed. The mine to be developed in accordance with smart technology will be called Green Smart Mine.

“The Green Smart Mine will be located on fields owned by Kazatomprom and currently being developed by the company. After declaring our objectives and goals, we will start working on obtaining subsoil use rights. A distinctive feature of the project is that the return on investment is expected to be the highest. The mine will start operating at the end of 2015, thus Kazatomprom will be able to demonstrate that a new generation green smart mine has been operating for more than a year in Kazakhstan by the time EXPO 2017 takes place,” Kozhakhmetov continued.

The smart mine will be located at the Ortalyk canned site, Central Mynkuduk deposit in the South Kazakhstan region. Kozhakhmetov expressed the hope that the technologies developed at the smart mine could be transferred to the mining sector.

Kazatomprom plans to raise $10 million from the launch of the new project. According to the Institute of High Technologies, the implementation of the project will cost approximately $30-35 million. Kazatomprom will allocate part of the funding for the project; the balance will be funded through loans. According to IHT estimates, the term of return of direct investments is 4.5-5 years.

The Green Smart Mine is designed for pilot testing and implementation of advanced technologies aimed at saving energy and increasing production and environmental friendliness. Experts will complete a feasibility study of the project by mid-year and the mine is scheduled to be commissioned in 2015.

IHT was established on February 5, 2002 as a scientific institute for the innovative development of the atomic industry of Kazakhstan.

To improve the competitiveness of the operating enterprises of the atomic industry of Kazakhstan, IHT carries out the development of new technologies of a high degree of readiness.

IHT is the basis of an infrastructure of effective scientific support of development of the domestic uranium industry. The structure of IHT assumes carrying out the full work cycle, from a scientific idea to scientific research and the introduction of the entire process chain from mining to the final product.

IHT has a pilot facility testing site and two affiliated specialised engineering companies: Research & Production Centre ULBA LLP and Research & Production Association ULBA-Engineering LLP. In general, it represents a complex research and design institute which solves problems of the scientific and technical maintenance of the uranium industry. IHT also implements research and a skilled and innovative approach in construction; monitoring, analysis, adaptation, use and transfer of the newest scientific and technological developments of the uranium, metallurgy, renewed energy and other allied industries; as well as the exchange of best practices and technologies with leading foreign educational and scientific organisations.