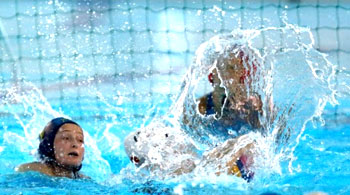 Kazakhstan’s teams did their best, qualifying for the next water polo world championship.

In the dramatic final, the team lost to China. It was a tough fight and for most of the game the teams were even in scores. The Kazakh team, coached by Sergey Drozdov, scored the first goal, then the Chinese equalized. Regular time ended with the teams tied at 8:8. In extra time, they stayed tied, scoring one goal each. But then the penalty shoot-out was won by the Chinese.

The Kazakh players were unlucky: Rustam Ukumanov almost scored 14 times but managed to do so only once. But Sergey Gubarev scored six goals in regular time.

Kazakhstan women’s water polo team was also defeated by China in the final match of the group stage of the championship which was also held on November 25.

The Kazakhstan team had a strong start and led 3:1 at the end of the first period. But the Chinese women rebounded and came back from behind, winning by a score of 13:8.

Both male and female water polo teams from Kazakhstan have thus qualified for the next water polo world championship.