By Tom Michael in Central Asia on 29 September 2017 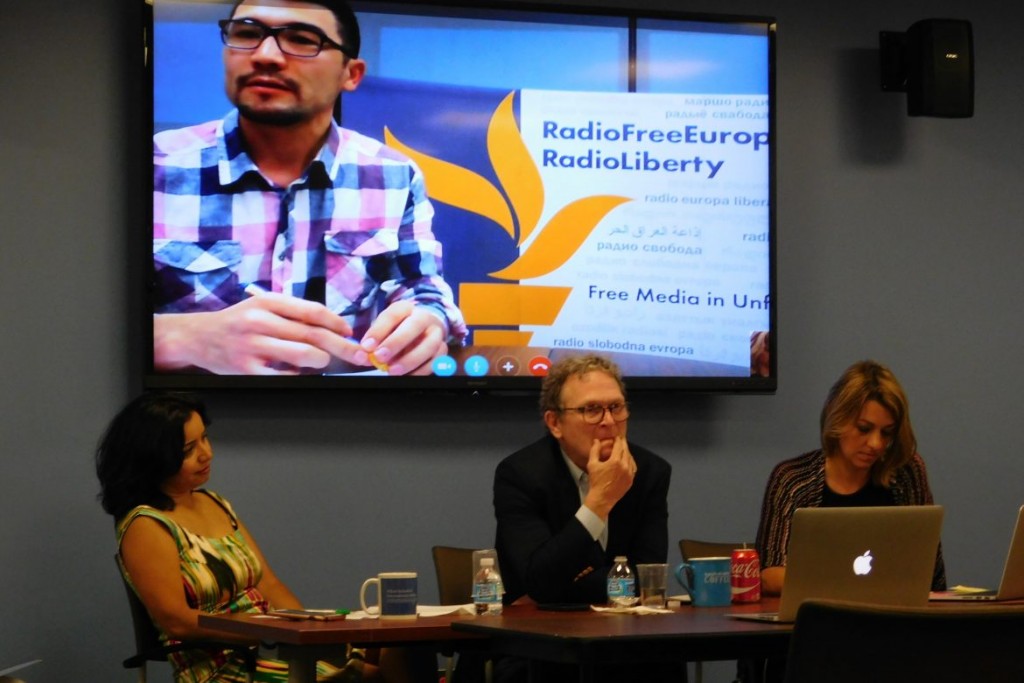 Alisher Sidikov, head of RFE/RL Uzbekistan news agency joined in the discussion at the George Washington University Fletcher School of International Affairs via Skype, while Sean Roberts, a GWU professor, and Navbahor Imamova, a reporter with the Uzbek Service of Voice of America, participated in person.

When Karimov died in September 2016, Mirziyoyev, who had served as Karimov’s prime minister, quickly became the front-runner to succeed him as president. He was formally elected in December 2016, and has since initiated some reforms that have international observers hopeful the country can become a more transparent democracy. Upon assuming the presidency, Mirziyoyev said he expressed his intention to build “a democratic state and a just society” where “human interests come first.”

Indeed, he has released some political prisoners, begun to relax government control over Uzbek media and will abolish exit visas that prevented citizens from traveling abroad without permission from the state starting in 2019, according to Freedom House, a Washington-based human rights advocacy group.

Sidikov, who has covered Uzbekistan for more than a decade, said Mirziyoyev “already is in some ways better than his predecessor and in some ways showing some progressive kinds of moves.”

Roberts, an expert in Central Asia who is director of the International Studies Program at the GWU, said Mirziyoyev’s transition was “smooth” and aided by Uzbek government elites. But he also said significant changes could come from the new president’s leadership, which he suggested could, in essence, become a “revolution from above.”

He noted Mirziyoyev’s move to spur economic investment and judicial reform, among other initiatives, and said he’s willing – at least for now – to assume that the moves toward a more open democracy are legitimate and not just for show.

“The reason I think it’s worth taking this agenda at face value is there is really no record of Uzbekistan trying to fake liberal policies,” he said. “We have certainly seen that from other countries.”

But the professor said questions remain about Mirziyoyev’s ultimate intentions.

“Is the government trying to reform to a liberal democracy or to a more managed, softer authoritarian model we’d see in Russia?” Roberts said. “The latter certainly makes sense but still for that to happen that would be a revolution compared to what we have had.”

In August, Uzbekistan – a former Soviet republic – set more fully in motion plans to reform its currency, yet another step toward international credibility.

The government abolished mandatory sales by exporters of a quarter of their foreign currency revenue, after earlier allowing a limited number of banks and companies to deviate from the official exchange rate in deals. Next would be allowing full convertibility of the currency, aligning the official and market rates and lifting restrictions that force ordinary Uzbek to buy foreign currency from the black market rather than from banks.

“The currency reform will be critical,” Roberts said. “And we are only part way down that path.”

Navbahor Imamova, an Uzbek native and now a television reporter with the U.S. government-backed Voice of America, recently traveled to Uzbekistan for a second time since the December 2016 election. She said while she was unable to land an interview with the new president – and the government seemed somewhat suspicious of Voice of America generally – she was generally impressed with “an incredibly high morale” among the country’s citizens.

“Maybe we will finally have a leader who will let us run our own path,” Imamova said. “He knows that the hunger for change is obvious and he is determined to channel that energy to a direction he wants. He wants to move the country forward, but he wants to consolidate power and be the most powerful person in the country, too.”

She said while regular Uzbek citizens may want more democratic freedoms, the country’s elite may yearn for the status quo if change it too abrupt.

“He has a lot to do in terms of managing expectations,” Imamova said.