By Aidana Yergaliyeva in Nation on 10 June 2020

Where does Kazakhstan stand in terms of its environmental friendliness rating on June 5th, World Environment Day? The state and non-governmental campaigns bringing awareness to climate change and encouraging sustainable lifestyle changes have experienced steady success over the last few years in Kazakhstan.

The solar panel field of Hevel Kazakhstan, a 100 MW solar power plant built this year in the Tselinograd district of the Akmola Region. Photo credit: akorda.kz.

To comply with the Paris Agreement, which Kazakhstan ratified in November 2016, the Kazakh government has been working and widely discussed the new draft Environmental Code, which will be enforced in 2025.

The new draft Environmental Code’s primary target will be the 50 largest enterprises that account for 70 percent of emissions in Kazakhstan. The government expects the enterprises to replace their old technologies with the best available technologies (BATs) by 2025.

The code calls for a transition to BATs using a carrots and sticks approach. The draft code rewards those enterprises already utilising BATs with an exemption for environmental fees by 2025, and punishes those who fail to follow the code with increasing environmental fees for them every four years from 2025 onwards.

Failure to follow the code will not result in any enterprise being forced to close its factories and plants, stressed Kazakh Deputy Minister of Ecology, Geology and Natural Resources Akhmetzhan Primkulov during a recent press briefing at the Central Communications Service.

The code will also regulate the allocation of funds coming from environmental fines. It will redirect all funds to improving the environmental situation in the regions. According to Primkulov, these include projects such as landscaping of settlements; arrangement of parks; construction and repair of sewage treatment facilities; the fight against natural dumps, among other things.

“Statistics say that on average, the regions spend no more than 40 percent of the raised money on the environment, and in some regions this figure does not even reach five percent. Therefore, we introduced a new norm that all money should be spent on the environment,” the deputy minister said.

The new draft will introduce automated systems to monitor sources of emissions in real time. The norms to the procedures will become mandatory in the new draft of the environmental code. This will ensure reliable public access to data and reduce business inspections, he said.

Most recently, Kazakh President Kassym-Jomart Tokayev visited Hevel Kazakhstan on May 29, a 100 MW solar power plant built this year in the Tselinograd district of the Akmola Region. The plant received around 30 billion tenge of investment for its initial construction. The plant will generate more than 148 million kWh of electricity annually. The project relied on its own innovative green technologies – heterostructured bilateral solar modules. 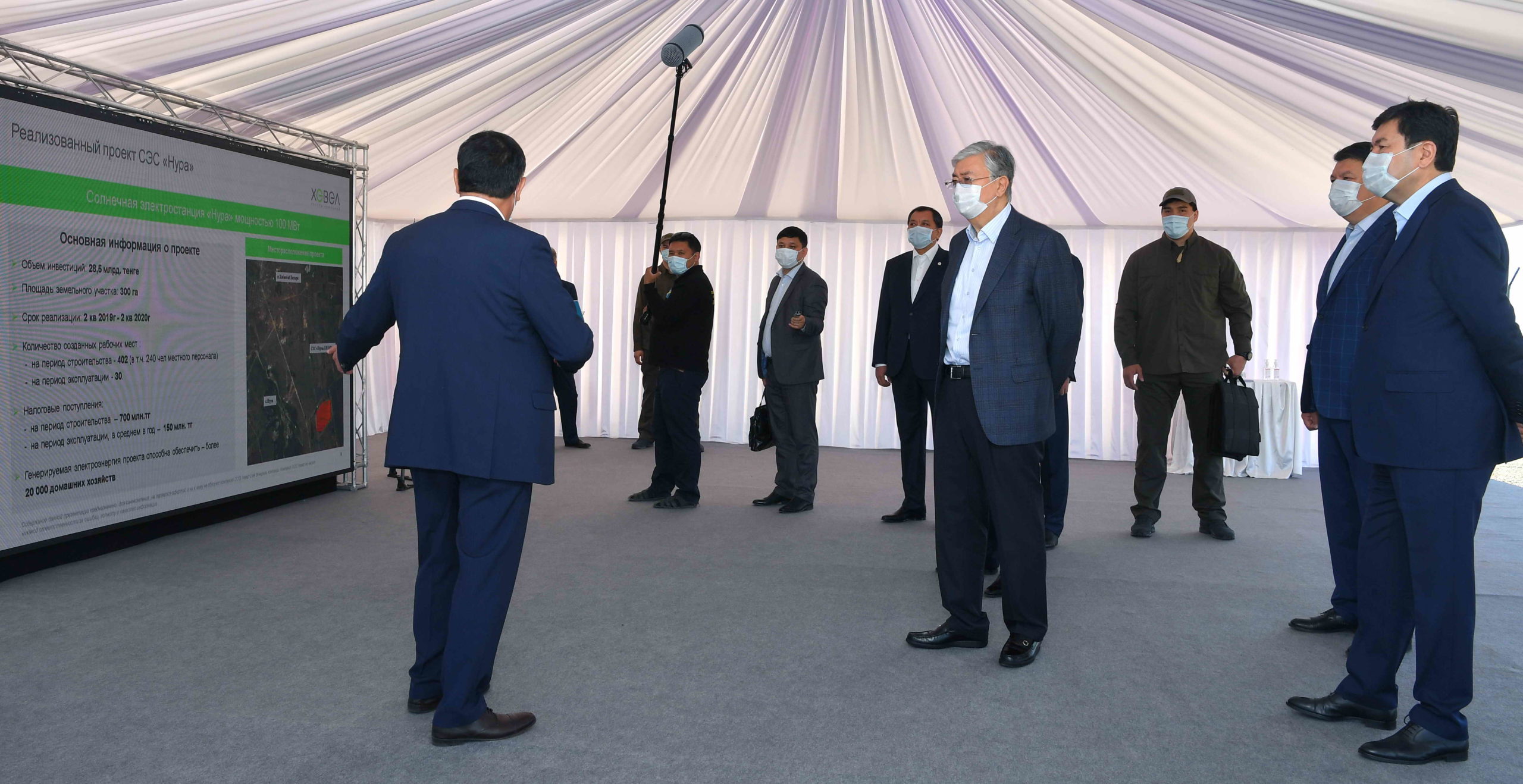 Kazakh President Kassym-Jomart Tokayev (C) during his May 29 visit to Hevel Kazakhstan, a 100 MW solar power plant built this year in the Tselinograd district of the Akmola Region. Photo credit: akorda.kz.

In addition to these, the Kazakh Ministry of Education and Science and the United Nations Development Program (UNDP) in Kazakhstan launched a four-year project to develop environmental education on June 3rd. The project will equip 17 educational organizations with green, resource-saving technologies and will educate more than 6,000 teachers on environmental protection, nature management, and environmental and economic safety curriculum.

“The project aims to promote environmental responsibility in society, which is necessary for the rational use of natural resources and for the full and sustainable development of the state and the global world…” said UNDP Representative in Kazakhstan Yakup Berish

As for public initiatives, the younger generations are mostly involved in small recycling projects and zero waste campaigns. Young bloggers also try to popularize a healthy lifestyle and share tips to reduce waste in households. The young Eco Networks recycling service provider for offices, in particular, had an impressive start coordinating with large and small Kazakh companies and businesses.

Many neighbourhoods already have recycling bins for plastic, paper and glass. Almaty has plans to become more pedestrian friendly, while Nur-Sultan endorsed alternative transport and bike sharing stations. All in all, Kazakhstan is on a gradual transition path towards embracing the new Environmental Code.