By Anuar Abdrakhmanov in Sports on 25 July 2016

ASTANA – The Davis Cup World Group play-off draw took place in London. The Kazakh men’s national team learned it will play its Russian counterparts Sept. 16-18 in an away match. 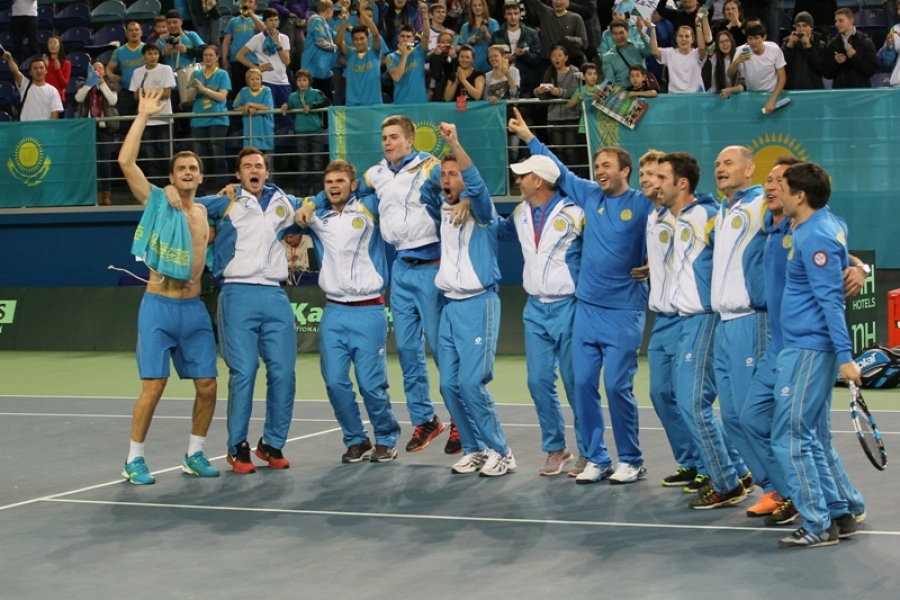 Russian Tennis Federation President Shamil Tarpishchev noted earlier if the Russians were the hosts, the match would be played in Moscow. Team Russia recently made it to the World Group play-offs by beating the Netherlands 4-1 in the second round match of the Europe-Africa zone’s first group. If successful, the Kazakh national team will return to the elite division of the tournament.

In an interview with The Astana Times, Team Kazakhstan’s captain Diaz Doskarayev commented on the draw.

“I can’t unambiguously say if the draw could be kinder for Kazakhstan or not. Instead of Russia it could be any of seven other teams in the pot – Ukraine, Slovakia, Chile, Mexico, Poland, Brazil, India or Uzbekistan. All are strong teams. Of course, we understand that we are expected to play a serious contender. We do not need to pay too much attention to whom we are playing, but rather deal with our planning and training of our players and motivate ourselves to win.”

He added the opponent has a strong lineup.

“There is, first of all, the experienced Teimuraz Gabashvili, who is always involved in the Davis Cup and has played very well for the national team. I want to also note the young players, Karen Khachanov and Andrei Rublev, of whom Russian tennis has great expectations. Both are very skilful and promising players. In Kitzbuhel the former recently defeated Philipp Kohlschreiber, who was the second racket of the tournament with the prize pool of more than 460,000 euro (US$506,440). Russia has other strong players too, like Evgeny Donskoy, Konstantin Kravchuk and Andrei Kuznetsov. Each of them can cause us problems.”

Downgraded from the World Group in 2013, the team has failed to return. In the meantime, Kazakhstan has consistently played in the elite division and since 2011 has avoided relegation to the Asia/Oceania zone. Therefore, the Russian players will clearly be well motivated to show their best against Kazakhstan.

“Few people like to play on the Russian team, given their desire and ambition to get into the World Group. Over the last three years, Russia was not represented in the World Group and now they have such a good opportunity. They could not do it when they played at home against Spain, with Italy, but now they will once again play on their court, this time against Kazakhstan. I can repeat, but we expect a heavy game. We are going to Russia with one goal – to win. We have a number of arguments in our favour. We have an experienced fighter who has long been in the World League, so we’ll do everything possible to ensure a positive result,” said Doskarayev.

Russia won the Davis Cup in Paris in 2002, defeating France 3:2, and four years later in Moscow, topping Argentina 3:2. The team reached the tournament’s final match three times (1994 in Moscow lost to Sweden 1-4; 1995 in Moscow, lost to the United States 2-3 and 2007 in Portland, lost to the U.S. 1-4). Kazakhstan’s best result was reaching the quarterfinals.

The Davis Cup is the biggest international team event in men’s tennis. Held annually since 1900, it has been run by the International Tennis Federation since 1979.

The Tennis Federation of Kazakhstan (TFK) also announced recently that the National Tennis Centre in Astana will host the 18th President’s Cup (also known as Astana Challenger) July 25-31 as part of the Association of Tennis Professionals (ATP) Challenger Tour and International Tennis Federation’s (ITF) Women’s Circuit. The President’s Cup is growing in popularity, as evidenced by the annual increase in participants, noted the TFK press release. The tournament drew approximately 100 athletes from 30 countries in 2015 and the total prize money this year is $125,000.

The Astana Masters 12 & under President’s Cup and Astana Open for amateur players will be held at the same time. Entrances to all matches will be free.