By Zhanna Shayakhmetova in Nation on 13 May 2020

A gradual introduction of a progressive scale for individual income taxes will be discussed by experts and the public, said President Kassym-Jomart Tokayev during his working visit to Almaty. A change in the Individual Income Tax was announced on May 11 at the state commission meeting. 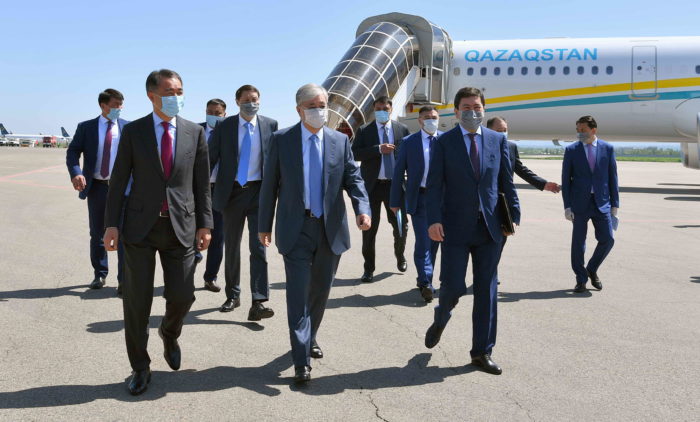 Kazakh President Tokayev arrives to the nation’s largest city, Almaty, as part of his first working visit after the 60-day state of emergency amid the COVID-19 pandemic.

“I set the task before the government to study this issue. We have to decide whether to introduce this scheme or not. The objective of the progressive scale is to make it so that people who earn less pay less taxes. And so people who earn more and are considered rich should pay, respectively, more taxes. This system exists in many countries,” he said.

President Tokayev reassured citizens that the income tax would not exceed 15 percent in the country.

It should be mentioned that Tokayev’s visit to Almaty was his first working trip after the state of emergency ended on May 11.

Before the pandemic, Almaty authorities announced major plans to modernize the urban infrastructure. Almaty boasts a favourable business and investment climate. The city ranks first among all Kazakh regions in the World Bank’s subnational rating for ease of doing business.

As the city slowly returns to normal life, construction works were resumed.

The city now strives to become the largest aviation hub in Central Asia as the Turkish company TAV Airport Holding intends to build a new terminal with an area of 55,000 square meters.

The project costs $162 million. It is expected that the new terminal capable of managing passenger traffic of up to six million people per year will be opened in 2022.

A 784-meter long transport interchange at the intersection of Bukhtarminskaya Street and Kuldzhinski Trakt will also be built in the city. More than 20 billion tenge (US$47 million) will be invested in the project.

Tokayev thanked doctors for their dedicated work as he visited a new COVID-19 mobile testing unit.

“A pandemic is actually a war. All the nations have declared war against the pandemic… We can defeat the pandemic together,” he said.

The city authorities are also investing in the House of Social Services. It offers services for the most vulnerable groups and an employment center will also be located there.

The President noted that social support for the population is a priority and a strategic task. It is necessary to pay attention to this issue despite the pandemic.

Tokayev also took time to comment on the reconstruction project of the Botanical Garden, one of the most beloved places for city residents. He called people “to protect this area and treat it like their own home.”