By Dmitry Lee in International on 4 September 2015

ASTANA – China and Kazakhstan agreed during a recent state visit by Kazakh President Nursultan Nazarbayev to Beijing to launch 45 new projects, including 23 projects worth $23 billion, according to Akorda.kz. 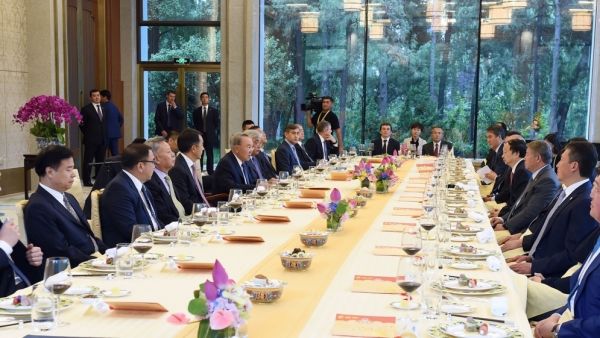 Nazarbayev also noted that such high-level meetings between the two nations will improve bilateral relations.

“I consider this visit a turning point in Kazakh-Chinese ties. We have been cooperating with China mainly in the energy and resource industries for over 20 years. In the new stage [of relations] we are to engage in intensified collaboration of the manufacturing sectors of the economy, including engineering and processing of resources. Yesterday during the negotiations with the leader of the Communist Party of China Xi Jinping, we agreed on the establishment of 45 joint projects. Twenty-five have been signed, totalling $23 billion,” Nazarbayev said.

The signing of the agreements was attended by dignitaries, including Chairman of Huawei Corporation Sun Yafang, Chairman of the Tsinghua Corporation Huo Qinghua, General Secretary of the Multilateral Interim Secretariat of the Asian Infrastructure Investment Bank Jin Liqun, Chairman of the Board of Directors of the CITIC Group Chang Zhengming and President of the State Development Bank of China Zheng Zhijia, among others.